WELCOME TO A NEW WAY OF LOOKING AT THE AMERICAN REVOLUTION!

Programming Revolution is a cross-curricular unit designed to incorporate 5th grade social studies, literacy, mathematics, science, and technology to achieve two major goals.  By showing how all subjects come together in real life, students will better grasp the concepts and skills they are currently working on in their core classes and in computational thinking skills in STEM Lab.  Cross-curricular units also help students develop critical thinking and problem solving skills that are applicable in grappling with new concepts and skills, as well as evaluating issues and situations in everyday life.

In the Programming Revolution Unit, students will use what they learned in STEM Lab about computer programming to create a computer program of the American Revolution.  Students will use computational thinking skills including abstraction, algorithms, programming and development; develop computing analysis skills by manipulating data, analyzing systems, and participating in simulations; and will become innovative designers as they design a program for revolution.

​5th Grade students have recently learned about computer programming.  Students came to understand coding terms by comparing them to mathematical terms they have already learned.  They analyzed coding structure by comparing it to story structure.  These are reiterated in Lesson 1 of the Programming Revolution Unit.  Below is a chart of the analogies and parallels in terms that were covered.
PROGRAM AND STORY STRUCTURE COMPARISON 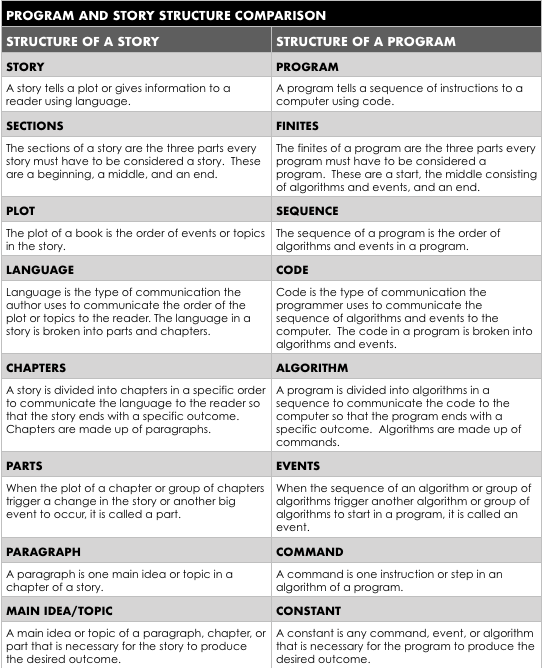 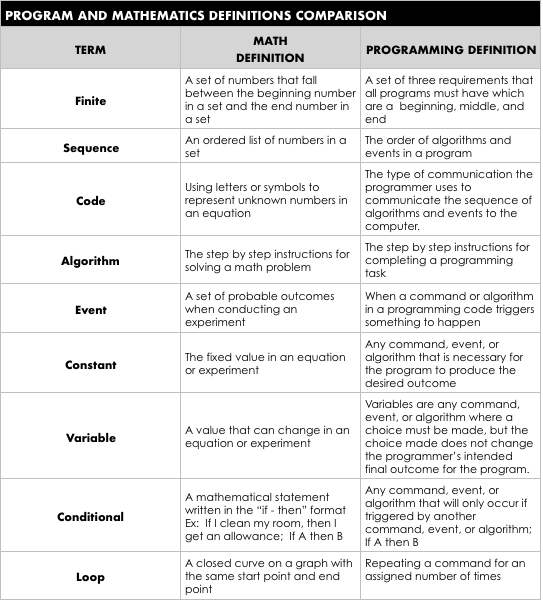 In the course of reading about this unit, you will see underlined words.  These words are links.  Clicking on these links will open up a new tab that will take you to the Programming Revolution Glossary.
​A Revolution occurs when the people of a nation overthrow their government and establish a new government.  There have been many Revolutions in our world history and whether they were successful or unsuccessful, they have the same common factors that lead them to the idea of revolution and the same basic road in attempting revolution.  If we were to tell the story of the American Revolutionary War as a computer program, we would start with these factors that are common in all revolutions and create a program for Revolution.  We will start by establishing our finites.  These are start, the algorithms and events that make up the middle, and the end.  Then, we identify the constants in each algorithm.  These are the things that are true of most revolutions.  Finally, we identify the variables by charting examples of each algorithm’s constants that were true in the American Revolutionary War.
All students will have the same program template that includes start, the algorithms, events, and constants.  Students could have different variables for each algorithm.  This is because students may see different issues, situations, and events, as playing different parts in each algorithm.  This is ok and actually encouraged, because remember, variables do not affect the program’s outcome.
The following chart is the Algorithm for Revolution Template the students will receive.  They will use Google Sheets to design their programs.
THE REVOLUTION PROGRAM TEMPLATE 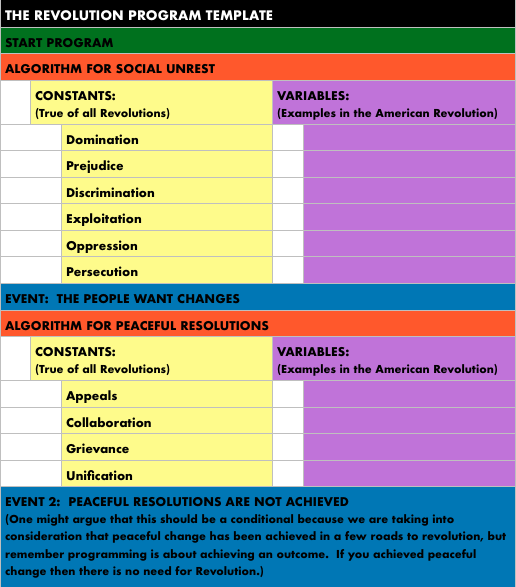 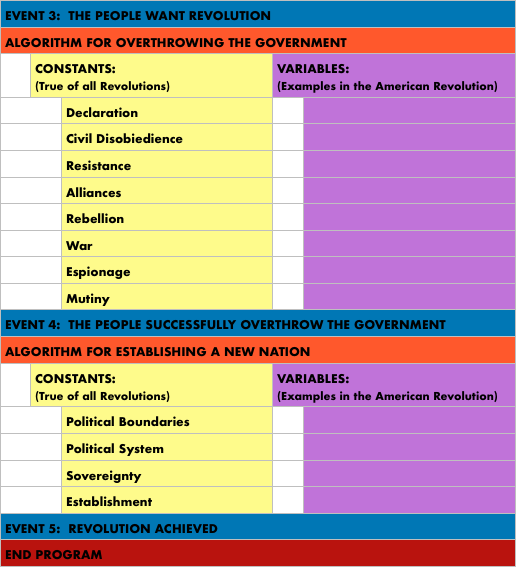 Standard 2:
Create an algorithm to solve a problem while detecting and debugging logical errors within the algorithm.

Standard 3:
Create an algorithm that is defined by simple pseudocode.

​Standard 5:
Develop and recommend solutions to a given problem and explain the process to an audience.
PROGRAMMING AND DEVELOPMENT