The Lesson Mission is what you (the student) will be able to do after the lesson is over.
DIRECTIONS:  Today, you will not write your Lesson Mission.  You will do a week long project to demonstrate that you have completed the mission.

The Lesson Mission for today is:   I can describe the geography and economy of the Gulf Coastal Region during and just after the Reconstruction Era and explain how different things effected the economy and culture of the region.

DIRECTIONS:  Read today's reading about the History and Geography of the Gulf Coast Region.  Then work on your magazine page.  To stay on schedule, you need to read the article and create today's page by the end of the day.

The Gulf of Mexico, the ninth largest body of water in the world and is located at the southeastern corner of North America.  The states that surround the northern part of the Gulf are Florida, Alabama, Mississippi, Louisiana and Texas.  The Mississippi River contributes more than 90 percent of the fresh water entering the Gulf.

The Gulf of Mexico yields more fin fish, shrimp, crab, oysters, and crawfish per year than the Atlantic, Chesapeake, and New England areas combined.  There are more than 400 species of shellfish can be found in the Gulf of Mexico. Gulf beaches are considered the best shelling beaches in North America. 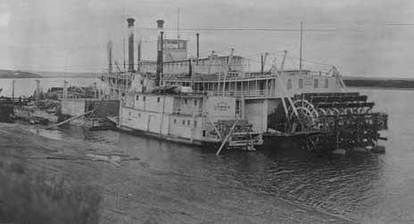 During the Antebellum Period the great steamboats of the Mississippi River made it possible for people from many parts of the United States to travel downriver to New Orleans. From there they could take a steamboat down the Gulf Coast. People came to the Coast from both the Northern and Southern states. Many were of English, Scottish, or Scotch-Irish ancestry. Some of these people moved to the Mississippi Coast in order to set up new businesses for the growing communities, such as sawmills, boatyards, and stores. For example, the town of Gulfport, Mississippi was a successful industrial center before the Civil War. It was founded by business men from New York, and many of its settlers were from New England and other northeastern states.
﻿African Americans﻿
﻿The Seafood Industry﻿
The Industrial Age 1861 - 1910
The Civil War interrupted the growth of the Gulf Coast.  In 1870, when the first east-west railroad between New Orleans and Mobile was completed, the Gulf Region once again began to grow.

The Gulf Coast is located along one of the world's most fertile fishing grounds. Coast residents and tourists have always enjoyed eating the oysters, shrimp, fish, and crabs so plentiful in local waters. However, a large seafood industry did not appear on the Gulf coast until the 1880's, when railroads, new canning methods, and commercial ice production made it possible to preserve and ship seafood nationwide.
﻿The Seafood Industry ﻿
﻿Bohemians﻿ 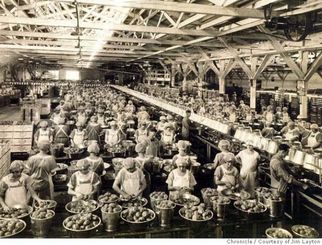 To solve this problem, the factory owners arranged to bring in experienced seafood workers from Baltimore, Maryland, the leading seafood canning town of the time. These people were immigrants of Polish descent, but were called "Bohemians" by coast residents. Beginning in 1890 and for twenty-eight years thereafter, the Polish workers traveled to the Coast by railroad car to spend part of the year working in Biloxi. They lived in company-owned housing called camps. Even the children worked in the factories. A few of the Polish workers decided to settle permanently on the Gulf Coast, where some of the descendants live today. Most, however, returned to Baltimore.
﻿Yugoslavians﻿ 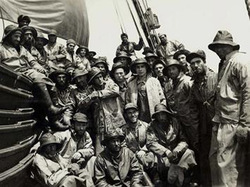 In the 1880's another group of people began to work in the Gulf seafood factories: the Yugoslavians (then called Austrians). Unlike the Polish, they came to stay. These immigrants had left their homeland of Dalmatia (a coastal region of Yugoslavia) both to make more money and to escape being drafted into the army of their conquerors, the Austro-Hungarian Empire. These families greatly valued education. So they encouraged their children to do well in school.  Because of this, the descendants of these immigrants entered many different businesses and professions.
The Early Twentieth Century  1900 - 1940
﻿Cajuns﻿ 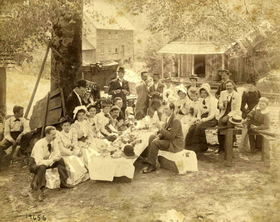 From 1914 through the 1930's the factory owners went to South Louisiana to recruit still another group of workers for the Biloxi seafood industry. These new workers were called "Frenchmen" in Biloxi, and today are called "Cajuns" in south Louisiana. They are the descendents of Catholic French-Canadian settlers who were expelled from Canada by the British in 1755 because they refused to become Protestant and swear allegiance to the new British overlords. These refugees wandered for as much as thirty years, undergoing many hardships.  Most of these people finally settled in South Louisiana. The "Frenchmen" who moved to the Mississippi Coast often stayed in touch with relatives in nearby Louisiana. Like the Yugoslavians, they branched out into many occupations in addition to the seafood industry.
﻿The Tourism Industry﻿ 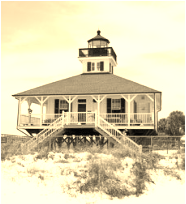 The coming of the railroads made vacation traveling easier and brought more tourists to the Gulf Coast. New Orleans businessmen could commute by train every summer weekend to the Coast, while their families enjoyed weekdays there as well. Later, railroads connecting the Coast with cities as far north as Chicago spurred an even greater tourism "boom." During the late 1800's through the late 1920's, many hotels were built. A variety of restaurants, entertainment spots, and other attractions grew. 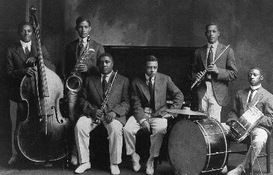 One popular tourist destination were spa hotels.  These hotels offered ways to relax and be pampered.  Some had piers with covered rooms or "pavilions" over the water.  Dixieland jazz bands played for dances in these pavilions, which were cooled by the sea breezes in the days before air conditioning. Tour boats for hire could take visitors for a sail in inshore waters or to offshore islands. 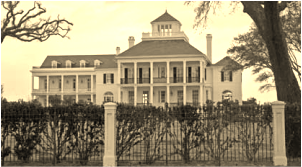 Two tourist seasons developed on the Gulf Coast: the summer season and the winter season. In general, the summer visitors came from nearby areas such as New Orleans, while the winter visitors arrived by train from as far away as Chicago and the northeastern states. The winter visitors were called "snowbirds," because they migrated south to escape the cold winters of their hometowns. Some people from each group liked the Gulf Coast so much that they became permanent Coast residents.