CRISES BEFORE WORLD WAR I 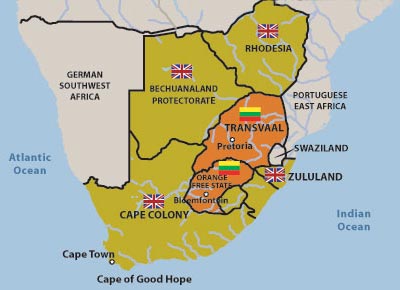 The Boer War of 1899 was fought between the British and Dutch imperialists called the Boers. This time, the scene was in southern Africa. South Africa was first colonized by Dutch settlers, who turned control over to the British after the Napoleonic Wars. The Boers were not happy about British rule and left the region in 1836, moving north to establish the independent countries of Transvaal and the Orange Free State. The British officially accepted the two states’ independence and things stayed peaceful until gold and diamonds were discovered there in the 1880’s. 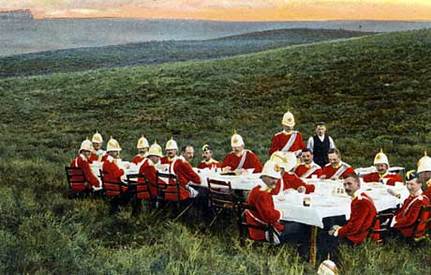 Not surprisingly, the British then decided that it would be in their best interest to own and control the land and resources of the entire region. Tensions increased between the British and the Dutch until war broke out in 1899. The Boer War lasted three years, and Great Britain eventually won. Thereafter, both powers’ territories were combined to form the Union of South Africa in 1910. Britain then had control over all of southern Africa, except the small, independent tribal nations of Lesotho and Swaziland. 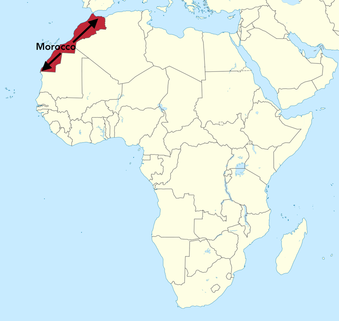 A third major clash occurred in northwest Africa in the country of Morocco and became known as the Moroccan Crisis . Both France and Great Britain were interested in this farming and mining region, but Morocco wanted to maintain its independence. Even so, in 1904 following the Fashoda incident in the Sudan, the British agreed to allow France to have a sphere of influence in Morocco in exchange for backing down and allowing the British to claim eastern Africa. 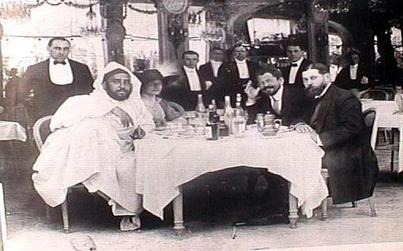 Sultan of Morocco
Kaiser William II was the ruler of Germany.  He was angry at France's influence and that he was given no say in the agreement.  So, he decided to intervene. In March 1905, the Kaiser went to Morocco and made a speech.  He announced to Morocco that Germany recognized their nation as an independent nation and promised German protection if France attempted to make a colony out of Morocco.  Then, the German Kaiser called an international conference to tell the world.

At the conference, Germany hoped to humiliate France by announcing that the French had illegally placed Morocco in the French sphere of influence.  Germany also hoped to split up the friendship between Great Britain and France by announcing that Austria - Hungary was supporting Germany's efforts in Morocco.  Instead, the plan backfired.  Great Britain supported France and eventually entered into an alliance together.  It was becoming obvious that two sides were developing. 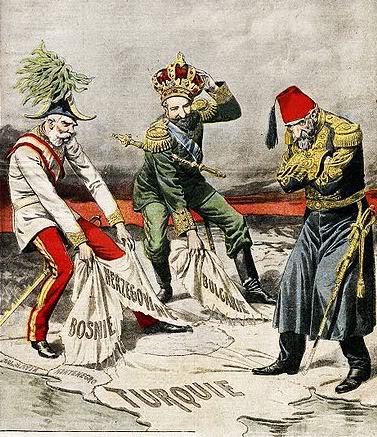 The Bosnian Crisis of 1908 and 1909 was perhaps the most serious crisis that led to the outbreak of World War One.  It occurred in the Balkans.  The Balkan region is located in southeastern Europe and includes the countries of Greece, Albania, Macedonia, Bulgaria, Romania, Serbia, Montenegro, Bosnia Herzegovina, a small region around Istanbul, and Croatia. 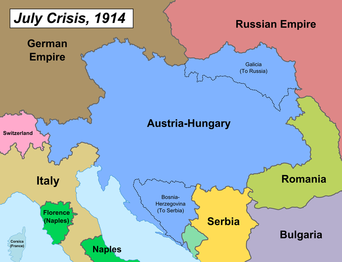 Austria-Hungary did not want to appear weak, so they threatened to invade Serbia.  Austria-Hungary had an alliance with Germany and knew Russia would not risk going to war with two strong European nations on her border over Serbia.  As a result, Russia backed down.  Serbia knew they could not fight Austria-Hungary without Russia, so they were forced to accept that Austria-Hungary now had control over Bosnia and Herzegovina.  Even though the crisis did not end in war, an intense hatred grew between the people of Serbia and Austria-Hungary.  This hatred would eventually lead to the assassination that sparked World War I. 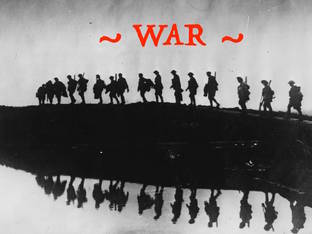 These crises resulted in three main outcomes. First, alliances that had formed in the late 1800’s were strengthened. Though Germany had hoped to split up France and Great Britain by its show of force, the two nations drew closer instead. Secondly, the conflicts in Africa, especially the showdown in Morocco, increased tensions among the powers.  Thirdly, Austria-Hungary's imperialism in the Bosnian Crisis motivated Serbian nationalist groups to form that would do whatever it took, including assassination, to preserve their nation and their way of life.

The second thing your group needs to do is to analyze what you have learned.  In this activity, you will create comic strip of each major crisis.

You will have to register.  Use the information on the StoryBoard Signup Slip that I gave you to register.  Then follow the directions to create your strip.  I will come around and help all those who need it.  If the site is down or blocked, we will do the comic strips on paper.

The following is an example of the Fashoda Incident.  When your group has completed your comic strips, we will display them outside the room. 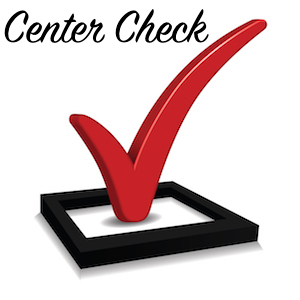 You have completed the Crises Before World War I Center.  Click on the button below to go back to the Lesson 1 - The Causes of World War I Home Page.
Back to WWI Lesson 1