DIRECTIONS:
LESSON MISSION QUESTION:
What were the labor wars of the Gilded Age; who was involved; how did it develop; what were the major issues and events; and what impact did the labor wars have on America?
This portion of your Lesson Chronicles is embedded below.

I can create a skeleton outline of a nonfiction text about the Labor Wars of the Gilded Age and Progressive Era. 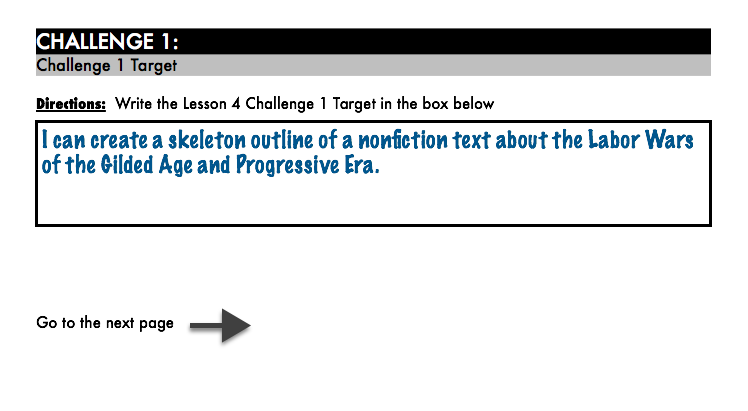 CHALLENGE 1 DIRECTIONS:
Now we will practice a "Before You Read Strategy" when reading nonfiction text.  It is called a skeleton outline.  In a skeleton outline, you identify the headers and subheads in the text and analyze the way that they are organized, to make predictions about the text. 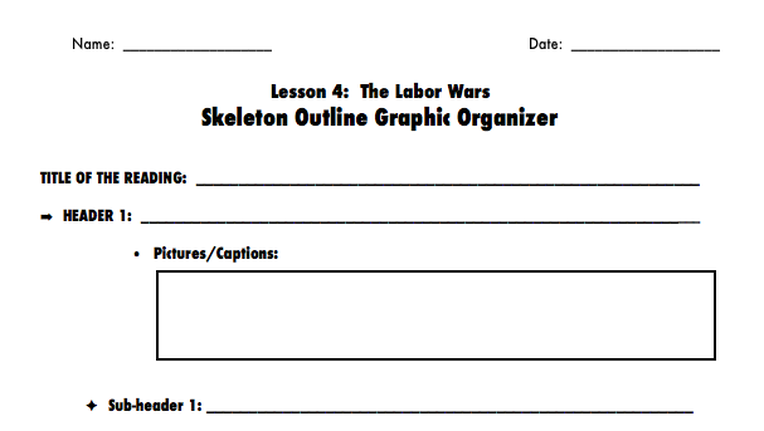 I can define major vocabulary from a nonfiction text about the Labor Wars of the Gilded Age and Progressive Era. 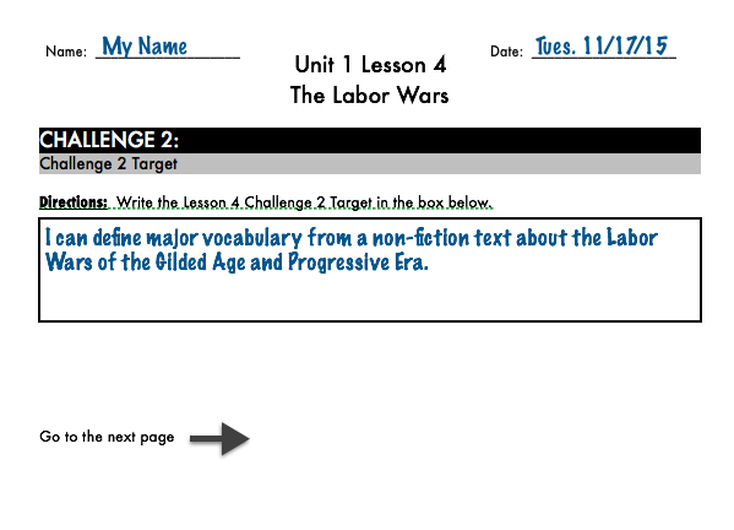 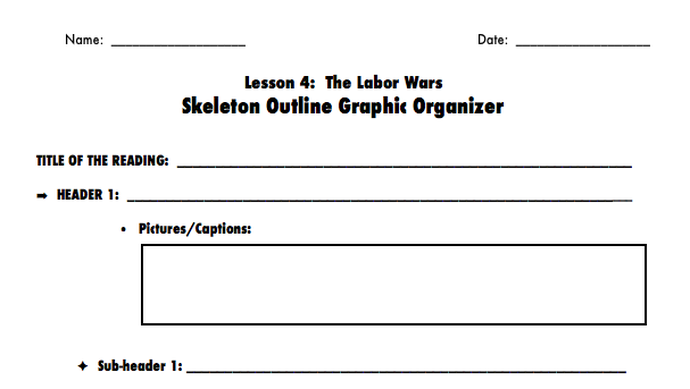 I can identify the main ideas of a nonfiction text about the Labor Wars of the Gilded Age and Progressive Era. 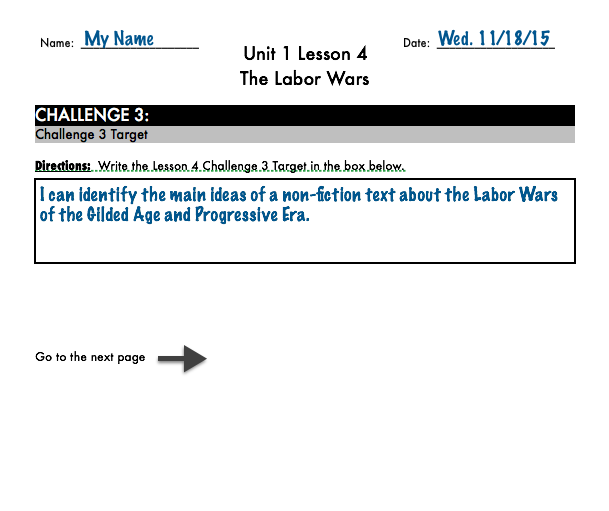 CHALLENGE 3 DIRECTIONS:
Now we will read the lesson text, The Big Argument."  After each section, we will stop and identify the main ideas.  Write these main ideas in your Get the Gist Graphic Organizer under Challenge 3. 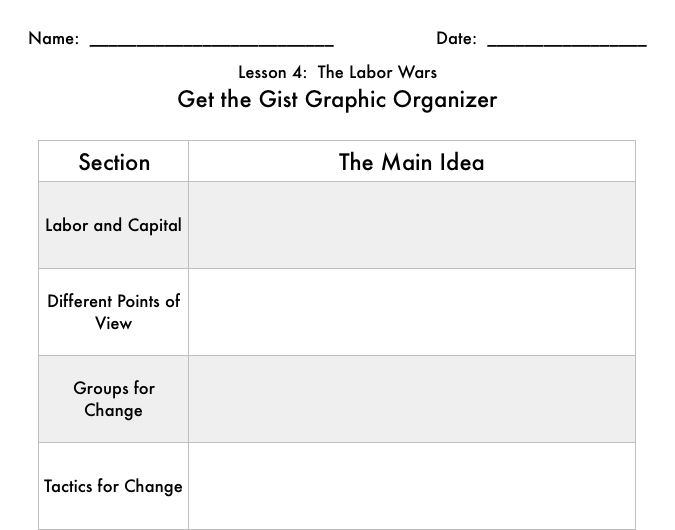 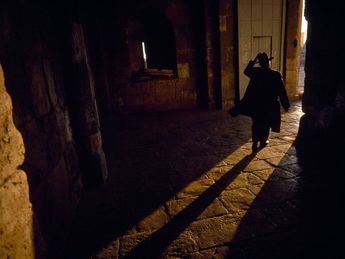 Sometimes workers would stage a walkout.  A walkout was a form of strike where workers walk off of their job to show they do not approve an employer's actions.  These types of strikes were a bit more effective but usually only produced short term benefits.  A walkout caused production to stop immediately and caused the owner of the industry to lose money.  This did prompt owners to give into some of the unions demands.  Unfortunately, when production started again and the owners began making money again, he either went back on the agreement or fired the members of the union that walked out. 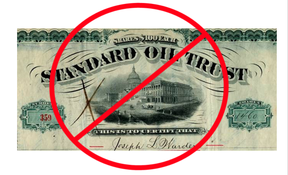 Another aggressive tactic labor unions used was a boycott.   A boycott was when labor unions convinced people to stop buying or using the products of a certain company so the company would give in to labor unions demands to avoid losing money.  Boycotts were successful in small communities but most of the time labor unions could not gather enough support for an effective boycott in large cities.

​The most aggressive tactic that labor unions used was intimidation.  This tactic earned labor unions a bad reputation not only with managers and owners but with many workers and progressives as well.  Intimidation tactics took many forms. 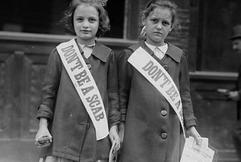 One form of intimation used by labor unions was called picketing.  Picketing is when workers in a union stand outside of a factory or business to scare away customers and anyone looking for a job.  These weren't usually effective because it was difficult to gather enough workers who would be willing to participate.  Many were afraid if they did, they would lose their jobs.  Also, there were too many people looking for industrial jobs.  If a person left their job, there was always someone else who needed it despite the poor working conditions. 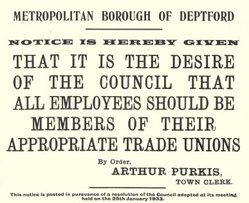 Intimidation tactics worked a little better for skilled workers or people who worked in a trade.  One form of intimidation with skilled workers that proved to be successful was a closed shop.  A closed shop is when a union of skilled workers bullies an employer into hiring only members of their union.  This was effective with trade jobs because a worker had to have special training or experience to do the job.  If a manager or owner needed to hire a skilled worker, it was difficult to find workers who were not members of a union.  Many were forced to agree to a closed shop in order to run their business. 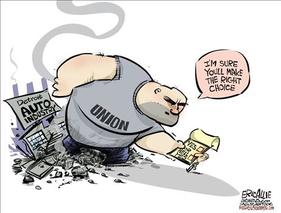 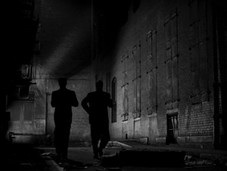 Non-union workers were a threat to labor unions' efforts to gain better working conditions.  Non-union members did not want to participate in strikes, walkouts, or pickets.   They were afraid of losing their jobs.  Labor unions intimidated them to join because union strikes, walkouts, and pickets would not work unless production stopped and the managers and owners lost money.  If the managers and owners still had people working for them, production would continue and union efforts would be in vain.
AGGRESSIVE TACTICS USED BY PROGRESSIVES 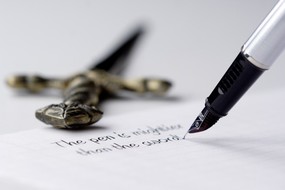 What do you think, "The pen is mightier than the sword" means?
​The Progressives also used peaceful tactics to improve working and social conditions.  One group of Progressives who made a big impact were the Muckrakers.  Muckrakers were journalists who published newspaper articles and magazines that exposed the corruption and cruelty of industrialists and government leaders.  Muckrakers were the first investigative reporters. 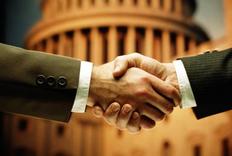 Another group of Progressives used politics to gain better working and social conditions.  Politics are the activities, actions, policies that are used to gain and hold power in a government or to influence a government.  Some Progressives lobbied to have laws passed.  Others actually ran for political offices so that they could implement and oversee changes themselves. 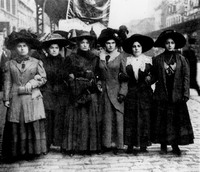 Another women's group was The Women's Trade Union League.  This group was a partnership between upper and middle class women and working class women.  The organization was one of the first of its kind.  It crossed class barriers to accomplish one goal, better treatment of women in the workforce.  The working - class women ran the league and the middle and upper class women donated money, paid for lawyers to represent the workers, informed the press, and participated in picket lines with the workers.
Violent Tactics 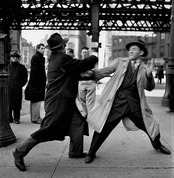 ​A few labor unions and Progressives used violent tactics.  Violent tactics were methods used that caused destruction, injury or death either in the process of attaining a goal or as a means to accomplish a goal.  Violent tactics tended to be more of a demonstration of anger about working conditions more than an actual attempt to gain better treatment.
VIOLENT TACTICS USED BY LABOR UNIONS 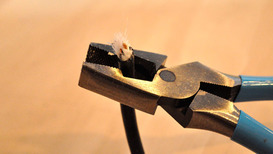 A few labor unions used violent tactics on purpose to force managers and owners to improve working conditions.  These tactics were illegal.  One of these purposeful and illegal tactics was sabotage.  Sabotage was when a worker would purposely damage or destroy machinery in order to stop production in a factory.   Some sabotage was obvious in that the machinery was so damaged, a person could tell on sight that it was sabotage.  Other sabotage was not obvious.  A worker would deliberately do something to make the machine malfunction.  Many times, people were hurt when the machines malfunctioned from sabotage.

Another violent tactic used was rioting.  Rioting is when a group of people participates in violent, public disorder, such as fighting, breaking other people's property, robbing stores, and running wild, as a form of protest.  Most of the time riots were not a planned event.  Rioting usually occurred when police or hired security teams tried to stop or interfere with a rally, strike, picket or other demonstration.
PROGRESSIVES VIEW OF VIOLENT TACTICS

Most Progressives did not approve of violent tactics to reform working and social conditions.  Progressives were educated people in the middle and upper class.  Their goal was to improve people's lives.  They did not want to hurt or injure others.  Progressives used education and our system of government to achieve reform.  Reform means to improve, correct, or fix something for the better.

Labor reform was not only a big deal to the workers, it was a big deal to those who owned or managed businesses as well.  Doing away with child labor, paying workers higher wages, cutting back on worker hours, making the workplace safe, providing benefits, time off, and compensation all cost businesses a great deal of money.  These types of reforms could cause small businesses to go into bankruptcy and cause a big drop in big businesses profits. 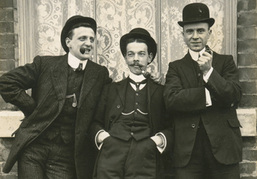 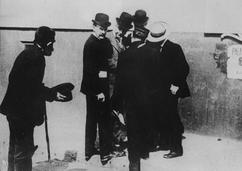 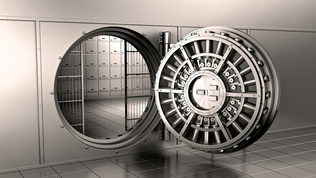 ​Another group that helped in peaceful, but perhaps unethical ways were politicians.  Politicians and businesses worked together to help each other.  Businessmen funded political campaigns and used their influence to get politicians elected.  In return, politicians made sure that labor reform bills did not pass for businessmen.
Aggressive Tactics

Sometimes companies over produce so that they can have an inventory.  An inventory is a stockpile of finished goods that are ready to be sold.  If a company had an inventory, then they could use a lockout to respond to labor reform efforts.  A lockout is a reverse strike where the owner tells the employees that they must agree to a pay cut or be fired. 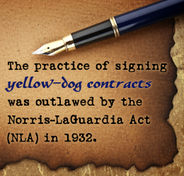 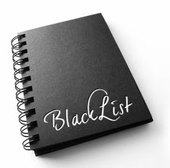 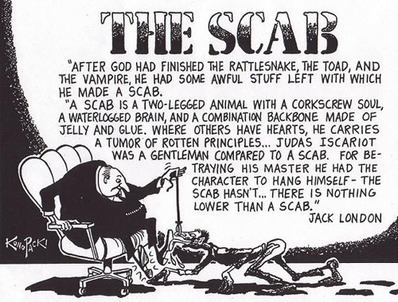 Businessmen also used tactics that turned violent.  One tactic they used was to hire scabs.  A scab was a temporary worker hired by a business, who crossed a strikers' picket line, to go to work in place of the strikers.  Businessmen knew this could possibly turn violent.  Picketers became angry at scabs for agreeing to work for businessmen and potentially harming their efforts.  Often the picketers would harass and threaten scabs until they finally left.  If the scabs continued to pass the picket line, picketers would often attack them and beat them.  Sometimes scabs suffered severe injuries and a few even died.  Businessmen were trying to keep their businesses going despite a picket line, but incidents where picketers attacked scabs made labor unions look badly.  So, often hiring scabs was also an attempt to turn the public against labor unions. 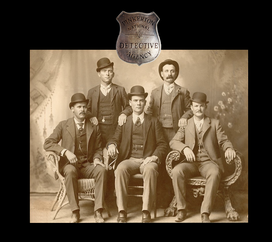 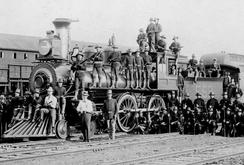 Recall the politicians who were part of the business consortium.   The politicians who held offices in congress were able to pass laws that made strikes illegal.  When labor unions held strikes, business owners had strikers arrested.  Sometimes this did not stop strikers.  They would simply get out of jail and strike again.  When this happened, state or federal troops would be sent to permanently break up the strike. 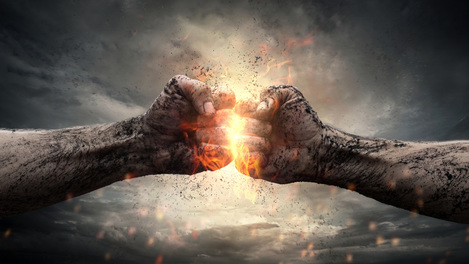 ​The Labor Wars were fights between labor unions seeking better treatment for workers and industrialists protecting their right to run their business.  Both sides had supporters and both sides developed strategies in order to get what they wanted.  Many events resulted from the conflict between workers and industrialists and many people became leaders in the struggle to win.  You will learn about these people and events in Challenges 2 and 3.  The changes that came about in the way workers were treated led others who felt they were being treated unfairly to fight.  Out of the fight to right the wrongs of the Gilded Age came a new era.  The new era was called the Progressive Era.
I can write a summary paragraph on a nonfiction text about the Labor Wars of the Gilded Age and Progressive Era. 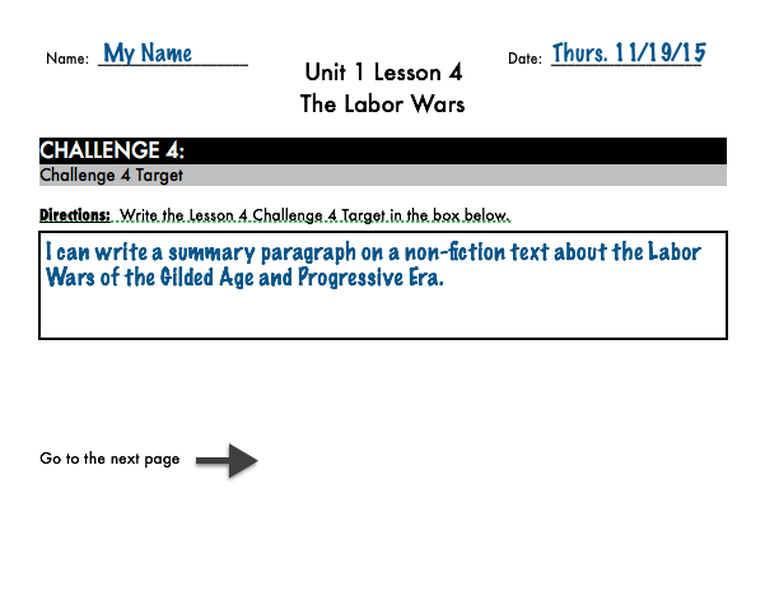 CHALLENGE 4 DIRECTIONS:
Now we will practice summarizing a nonfiction text by doing a "Clozed Summary".  A Clozed Summary is a summary paragraph where key words have been removed.  Your job is to determine which words from the word bank best fill in the blanks to complete the summary. 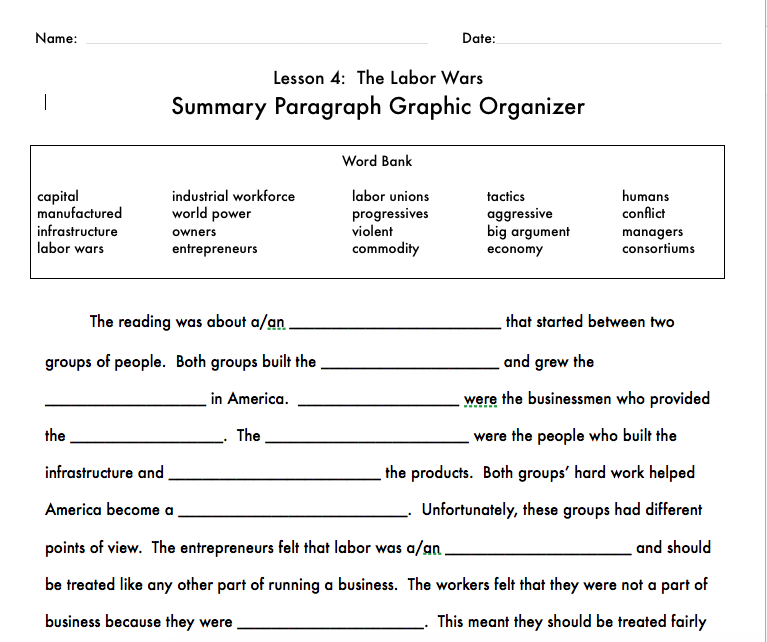 I can compare and contrast the major Labor Unions and Labor Reformers of the Gilded Age and Progressive Era.

I can identify the important details of major events in the Labor Wars of the Gilded Age and the Progressive Era.

CHALLENGE 7 DIRECTIONS:
Did you accomplish the Lesson Mission?  Let's see if you can apply the information you have gathered to answer questions about the industrial workforce of the Gilded Age. 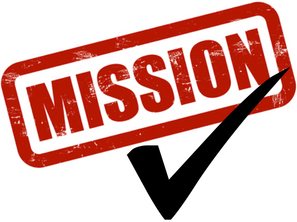 THIS IS THE END OF THIS LESSON MODULE 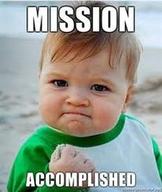 Congratulations!
You have completed the Unit 1 Lesson 4 Module!