DIRECTIONS:  Remember, the Lesson Mission is what you will be able to do after the lesson is over.  Begin today's Lesson Chronicles Entry by heading your paper with your name and the date and the Lesson Title.  Write down today's essential question.  Answering the essential question at the end of the lesson is your Lesson Mission!
Essential Question(s):
What is urbanization?  What three things led to U.S. urbanization and how did each thing contribute?

DIRECTIONS:
We will begin today's lesson with a slideshow by David Burns called Urbanization from his Frameworks for America's Past Series.  Follow along with me as I go over the slideshow.  After the slideshow, write down the three major reasons cities grew rapidly.  Click on the urbanization icon to the right to get started.

DIRECTIONS:  We are now going to read today's text.  Remember, we will stop after each section to identify the main ideas and talk about the vocabulary.  Remember to copy down all vocabulary words and definitions into your lesson chronicles. 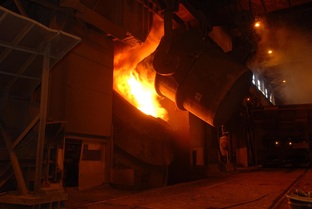 Bessemer Process
The Second Industrial Revolution accelerated urbanization.  It was the literal “gas pedal” that sent America racing through urbanization!  The Second Industrial Revolution moved America from the Age of Iron into the Age of Steel and replaced steam power with electric power. Great factories were built.   Mechanization advanced quickly.  New transportation systems developed.  All of this greatly increased the rate at which urbanization occurred in America. 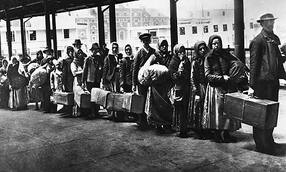 New Immigrants Arriving in America - photo by Lewis Hine
American urbanization occurred for many reasons.  Inventions and new technologies of the Industrial Revolution brought exciting new ways of life and activities to cities.  Migrants moved from rural areas to cities in search of job opportunities.  Industries that specialized in one product tended to locate in city.  Immigrants poured in from other countries looking to start a better life in America.  Rich industrialists usually had their main corporate offices in big cities so they could be near banks and other businesses and industries.  Advancements in infrastructure, transportation, and communication added to urban growth as well. 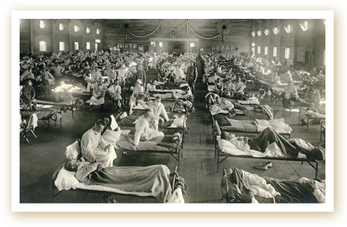 Spanish Flu Epidemic of 1918
Cheaply made apartment buildings with very little living space, called tenements, were built in areas of the city that were uncared for and run down.  Rapid growth and lack of planning led to inadequate basic facilities and services in large cities.  Pollution and poor sanitation led to deadly epidemics in the towns and cities. Towns developed “good” sections and “bad” sections of town because people moved into neighborhoods they could afford.  As cities grew, they expanded outward into more rural areas. 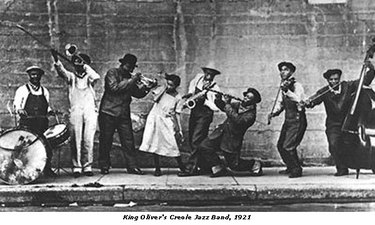 In this lesson, Topic 2 - U.S. Urbanization - you were introduced to urbanization.  You learned what urbanization is and why it occurred.  You were given an overview of the results that occurred because of urbanization as well.  Each lesson of this topic will probe a little further into the major effects of urbanization - the good, the bad, and the ugly!

In this activity, you will combine your math skills and social studies skills to gain a better understanding of the population growth that cities experienced during the late 1800s and early 1900s.  Below you will see a worksheet with a chart of major U.S. cities and their populations in 1870, 1900, and 1920.  As a group you will figure out the rate of growth for each city between 1870 and 1900 and 1900 and 1920, then answer the questions below the graph.  To figure out the rate of growth, you will use the following formula and instructions.

Below I did Boston for you as an example.
The population increase from 1870 to 1900

The population increase from 1900 to 1920
Remember to glue these into your Lesson Chronicles after we complete them.
If you are viewing this at home, make sure to scroll down this document.  There are two pages.

A Lesson Chronicles Activity is an individual activity where you prove that you accomplished the lesson mission.  Lesson Chronicles require you to keep a notebook or journal with a table of contents.  Each entry should be dated.  First, you write the lesson mission.  Then you prove you "can do" whatever the mission says by answering the essential question of the lesson in PQA format.  Remember PQA format means "Put the Question in the Answer".
DIRECTIONS:  Work by yourself to prove you have completed today's mission successfully by answering the essential question for today.  Answer the question on the first page of your Lesson Chronicles under your Lesson Mission. 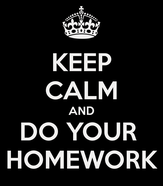 If you did not complete any assignments from today, they are homework.  You never know when I am going to check chronicles, so make sure you are keeping up!

END OF THE UNIT 3 TOPIC 2 MODULE

Resources Used in this Lesson