Howard Zinn first learned of the Ludlow Massacre from a song by Woody Guthrie, which Zinn says, “nobody had ever mentioned in any of my history courses.” To help future generations of students learn about Ludlow in their history courses, we offer here an interview with Zinn about the significance of Ludlow and his description of the history from A People’s History of the United States.
Striking family at Ludlow shortly before the April 20, 1914 massacre.
Shortly after Woodrow Wilson took office there began in Colorado one of the most bitter and violent struggles between workers and corporate capital in the history of the country.
This was the Colorado coal strike that began in September 1913 and culminated in the “Ludlow Massacre” of April 1914. Eleven thousand miners in southern Colorado … worked for the Colorado Fuel & Iron Corporation, which was owned by the Rockefeller family. Aroused by the murder of one of their organizers, they went on strike against low pay, dangerous conditions, and feudal domination of their lives in towns completely controlled by the mining companies. …
When the strike began, the miners were immediately evicted from their shacks in the mining towns. Aided by the United Mine Workers Union, they set up tents in the nearby hills and carried on the strike, the picketing, from these tent colonies.
The Ludlow Tent Colony, before the massacre.


Song: Ludlow MassacreWords and Music by Woody Guthrie
It was early springtime when the strike was on,
They drove us miners out of doors,
Out from the houses that the Company owned,
We moved into tents up at old Ludlow.
I was worried bad about my children,
Soldiers guarding the railroad bridge,
Every once in a while a bullet would fly,
Kick up gravel under my feet.
We were so afraid you would kill our children,
We dug us a cave that was seven foot deep,
Carried our young ones and pregnant women
Down inside the cave to sleep.
That very night your soldiers waited,
Until all us miners were asleep,
You snuck around our little tent town,
Soaked our tents with your kerosene.
Click on the icon below to visit the Ludlow Massacre Interactive Website. 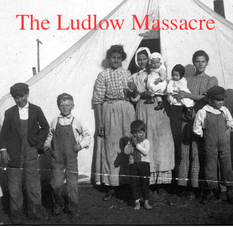