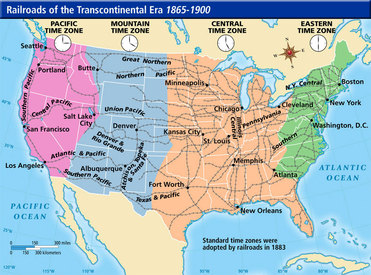 So far, you have learned that industrialization started when the production of goods moved from homes to factories.  Next, you learned that an abundance of natural resources provided the raw materials for factories to produce goods.  Then, you learned that the nation solved problems with shipping goods and communicating business across our vast nation with the introduction of the telegraph and the building of the Transcontinental Railroad.  Factories in the nation were thriving but the U.S. was still mostly a farming nation.  This would quickly change however, when the nation found new sources of energy. 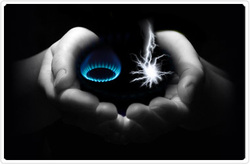 Energy resources are anything that is used up or consumed in creating power.  Before the Gilded Age, wood and coal were the major power sources.  Soon, people learned to harness the power of water with watermills and steam power.  When inventors and innovators learned to use electricity, natural gas, and oil as energy sources, factory production skyrocketed! 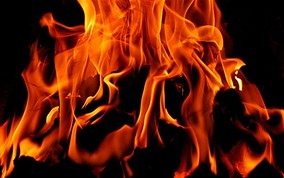 As mentioned in the Natural Resources lesson, coal was mined to produce energy and heat.   During the first half of the 1800s, steamships and steam-powered railroads were becoming the chief forms of transportation, and they used coal to fuel their boilers.  In the second half of the 1800s, more uses for coal were found.  During the Civil War, weapons factories were beginning to use coal. By 1875, coke,  which is a substance made from coal, replaced charcoal as the primary fuel for iron blast furnaces to make steel.  By the 1880s coal was beginning to be used to generate electricity for homes and factories.  Long after homes were being lighted by electricity produced by coal, many of them continued to have furnaces for heating and some had stoves for cooking that were fueled by coal. 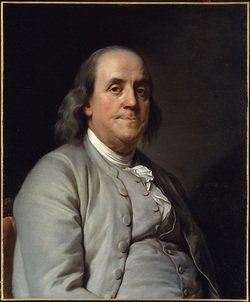 The history of electricity actually started way before anyone knew America even existed.  But the idea that electricity was a source of power really began with the statesman and inventor, Benjamin Franklin.  Franklin had a theory that lightning was electricity and that electricity could be transferred to another object.  He set out to prove it in an experiment.

In the experiment, he attached his kite to a string, and tied an iron key at the other end. Then, he tied a thin metal wire from the key and inserted the wire into a container for storing an electrical charge.  Finally, he attached a silk ribbon to the key. Holding onto the kite by the silk ribbon, Franklin began flying the kite and once it was in the air, he ran to the barn, while extending the kite string, so that he would not get wet. 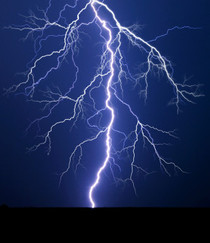 When the storm cloud passed over Franklin's kite, negative charges in the cloud passed onto his kite.  The charges went down the wet string, to the key, and into the jar.  Ben however, was unaffected by the negative charges because he was holding the dry silk ribbon.  The ribbon protected him from the charges on the key. When he moved his free hand near the iron key, he received a shock, because the negative charges in the key were so strongly attracted to the positive charges in his body, a spark jumped from the key to his hand. Franklin's experiment successfully showed that lightning was static electricity. Franklin was very lucky to have survived the electric shock. 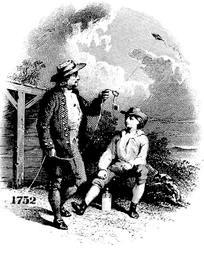 Click on the picture to the right of Ben Franklin and his kite to see an animation on how this experiment worked. 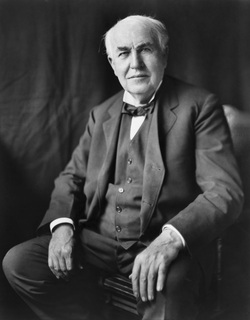 Thomas Edison
Many men worked to turn electricity into a power source.  These men paved the way for one inventor and innovator who would change the lives of Americans and the world forever.

No other man contributed more to harnessing electricity during the Gilded Age than Thomas Edison.  He was a scientist and an inventor.  During his life he patented 1,093 inventions.  Edison created the first research and development lab in the world in Menlo Park, New Jersey.  He called this lab the "invention factory."  His inventions earned him the nickname "The Wizard of Menlo Park."

Edison's four most important inventions were the electric light system, the phonograph, motion pictures, and the alkaline storage battery.  Any one of these inventions would have hugely impacted the world; and Thomas Edison invented all four!   Edison also made improvements to the telegraph, the telephone, and cement.   He even developed a substitute for rubber.  Edison's had many educated people working for him.  He called them his "muckers". 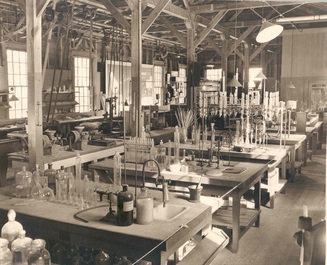 Thomas Edison's Invention Factory
A great scientist and inventor named, Isaac Newton once said, "If I have seen any further it has been by standing on the shoulders of giants.”  Newton died long before Edison was ever born, but what he had to say describes how Thomas Edison contributed most to U.S. industrialization.  Newton was talking about innovation.  When you gain success by making something better, it is an innovation, not an invention.  This is because someone else had the idea originally.  Newton was saying that he simply took others great ideas and tried to make them better.  He would have had no success at all, if not for the person who had originally had the idea. 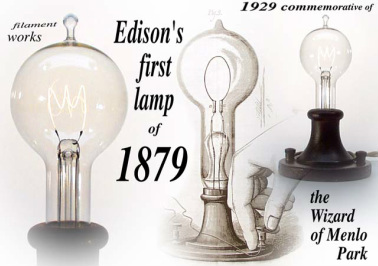 Now Thomas Edison did invent many things but many of his successes were actually innovations.  Many people give credit to Thomas Edison for inventing the electric light.  Edison did not invent it.  He innovated it.  He made it better by making changes to it.  In Edison's time, electric lights were very, very bright so people didn't want them inside their houses. They also did not last very long.  Edison innovated the electric light by changing the way the light worked.  He created a bulb that would not shine so brightly and would last much longer than the electric lights before.  More importantly, he was able to create this bulb inexpensively by manufacturing it.  It was the fact that Edison was able to make large amounts of light bulbs, quickly, and inexpensively that was the true innovation.  This is because it not only opened up electric lighting to the middle class and poor, but it was the beginning of Edison's most important innovation, the electric lighting system! 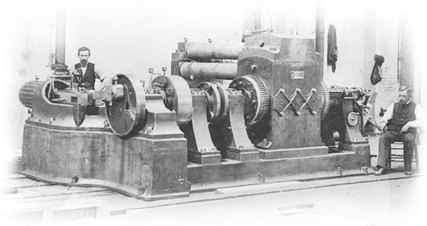 This is one of six dynamos from Edison's Pearl Street Station.
The light bulb was a break through in modern technology during this time, but it was Edison’s system of electric lighting that changed everyday life for people all over the world.  Edison figured out how to create an infrastructure for lighting buildings and homes in whole towns.   Infrastructure is the basic parts and equipment that are needed for a service to function properly in a city or region.  Edison was able to create electric lighting for whole towns by using light bulbs, electricity generators, wires to get the electricity from the power station to the homes, plugs for lamps, wall sockets, switches for the light bulbs, and many other things.   Edison’s first electric lighting infrastructure was the Pearl Street Station in New York City’s financial district.  It sent electricity to lights in 25 buildings on September 4, 1882. 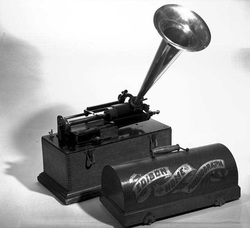 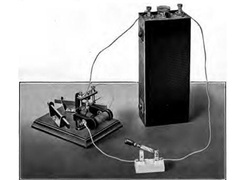 Edison's alkaline storage battery
In 1901, Edison invented the first alkaline storage battery.  It was used in railroad signals, miners’ head lamps, and marine buoys.  Edison would be shocked to see how this battery evolved into the batteries of today.  He would be even more shocked to see all the things that the alkaline battery can power.  If not for the positive attitude and hard work of Thomas Edison, industrialization would not have been as successful or come as quickly as it did. 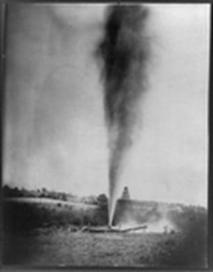 In 1859, Edwin Drake drilled a 69-foot well and struck oil and natural gas in Pennsylvania. From this well the first pipeline was constructed. A 5-1/2 mile-long pipeline only two inches in diameter that would carry the natural gas to the town of Titusville. 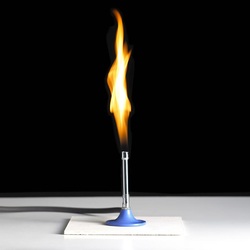 In 1885 a German chemist and physicist named Robert Von Bunsen perfected the Bunsen burner that was invented by Michael Faraday. He figured out that by mixing air and natural gas in a continuous stream through a tube, the flame can be easily controlled.

One of the first long distance pipelines was constructed in 1891. This pipeline was 120 miles long, and carried natural gas from wells in central Indiana to the city of Chicago. However, this early pipeline was not very efficient at transporting natural gas. It wasn’t until the 1920s that significant effort was put into building a pipeline infrastructure. 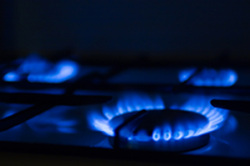 Today natural gas is widely used and in fact it is the third largest supplier of energy after petroleum and coal. 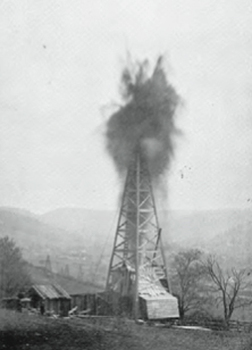 Around 1855, a scientist discovered that kerosene could be made from the black liquid that Native Americans and early settlers called “rock oil” (now commonly called crude oil or petroleum).  Kerosene was a cheap, clean replacement for the whale-oil lamps commonly used at that time. Soon the U.S. rock oil industry boomed because whales were becoming scarce causing the price of whale oil to go up.

On August, 27, 1859, Edwin L. Drake and William Smith were drilling for oil in Titusville, Pennsylvania.  They struck oil at a depth of 69 feet.  This was the first time that oil was tapped at its source, using a drill.  Titusville and other towns in the area boomed. Pennsylvania was not the only state to produce oil.  Edward L. Doheny located Los Angeles’s first well in 1892, and five years later there were twenty-five hundred wells and two hundred oil companies in the area.

In 1901, Texas started its climb in becoming the leader in the American oil industry when one of the largest and most significant oil strikes in history occurred near Beaumont, Texas, on a mound called Spindletop.  One year after the Spindletop discovery more than fifteen hundred oil companies had been chartered. Oil production in the United States by 1909 more than equaled that of the rest of the world combined. 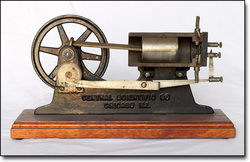 The invention of the internal combustion engine in automobiles and airplanes increased the need for oil.  Because the demand for oil grew, the price went up.  In an economy, if the need for something increases, the price increases, because the seller knows the buyer needs it and is willing to pay higher prices to get it.  The oil industry had a vast new market for what had been for many years a basically useless product. 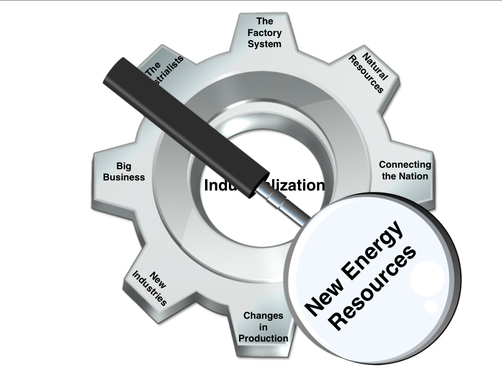 In this activity, you will work in your small groups to analyze how the inventions that contributed to industrialization changed life for Americans today.  Below you will see an online work page to help guide your discussion.  One member of the group will record the group's answers on the class forum.  For each invention or innovation, discuss how it might have lead to U.S. industrialization and how the invention or innovation effects the people of today.  Determine which inventions and innovations were the most influential on our lives today. Then rank the inventions and innovations in order of importance.  Be ready to defend your rankings in a whole group discussion. 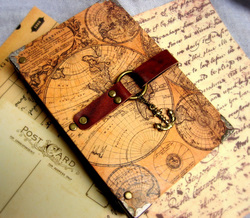 What were the new technologies that led to U.S. industrialization in the Gilded Age?


Lesson Mission: I can describe the new technologies that led to U.S. industrialization in the Gilded Age. 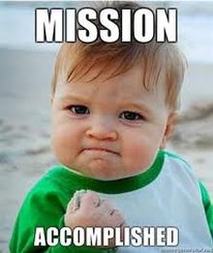 Congratulations!
You have completed the Lesson 4 Lesson Module!