Labor Unions and Activists
of the Gilded Age 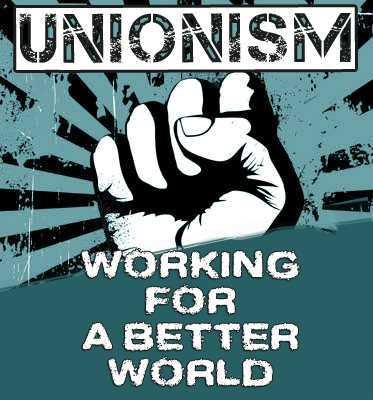 The Knights of Labor Official Seal
The Knights of Labor was created by  Uriah S. Stephens in 1869.   It began as a secret society of tailors in Philadelphia, Pennsylvania.   They kept the union a secret because they feared factory bosses would make life even worse for factory workers or even fire them as a punishment for joining a union.  Even though the Knights of Labor was kept a secret from factory bosses, the society managed to spread across Philadelphia with over 80 local groups.  By 1875 it had spread to other states.  Members developed secret symbols that they drew in chalk on sidewalks to alert other members of meetings.

Terence V. Powderly
By 1877 the Knights of Labor had members all over the nation.  As unfair treatment of workers worsened, membership in the Knights of Labor increased.  In 1879 Uriah Stephens resigned as the leader and Terence V. Powderly replaced him.  Powderly changed many things about the Knights of Labor.  He stopped requiring the organization to be a secret.  He opened membership up to all workers, regardless of their skills, sex, nationality, religion or race. The only occupations excluded from membership were gamblers, bankers, stockholders, lawyers, and saloonkeepers.   The organization under Powderly's leadership became more radical than before and members began getting involved in politics. 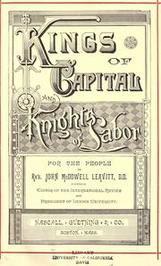 The Knights of Labor's Goals
The Knights of Labor had very specific goals.  They wanted an eight-hour working day, improved safety in factories, compensation for on-the-job injury, no more child labor, equal pay for equal work, equal pay for women, to end the use of prison labor, a graduated income tax, government ownership of railroads and telegraph lines, and a new land policy that benefited settlers rather than speculators. 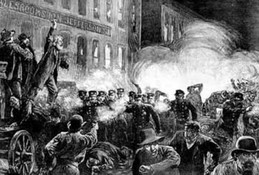 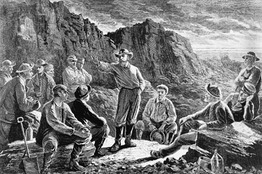 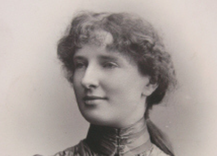 Molly Maguire
The name of the union came for a spunky little woman, named Molly Maguire, who lived in Ireland in the 1840s.
Molly Maguire rallied the poor against landlords who were treating their tenants unfairly.  They became famous for starting bloody fights with landlords.  In 1877, twenty of the people in the group were unjustly accused of murder and hung to make the poor stop fighting landlords. 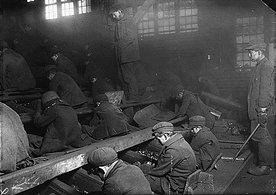 Children breaking coal
Many Irish people immigrated to the United States in 1845 during the Irish Potato Famine.  Most men took jobs in coal mines or railroads.  The Irish were treated with discrimination.  They worked in dangerous working conditions and were made to do the worst jobs.  They were injured often.  Some even died.  Those who were injured were fired and those who died received no compensation for their families.  The Irish were paid so little that many families had to have their children work in the mines.  Children as young as seven years old were hired to work.  They were only paid $1-$3 dollars per week until they were 16 years old.

Signs hung in stores
The Irish faced a great deal of discrimination.  Many coal mine owners began firing Irish and hiring other immigrants.  Irish immigrants became angry.  They were struggling to survive already.  People were angry and it caused them to act more violently.   It was not long until the first nationwide strikes and demonstrations were held to protest the situation.  The most notable strike was called the 'Long Strike of 1875.  Franklin B. Gowen was the president of the Philadelphia and Reading Railroad, and the Philadelphia and Reading Coal and Iron Company.  He got hired guns called the Pinkerton Detectives to come and deal with the Mollies who were starting strikes with his railroad companies.

The American Federation of Labor 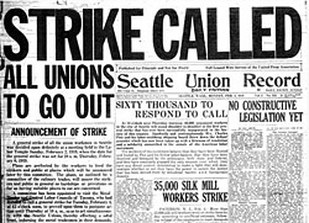 Gompers was a calm man who was very good at negotiating.  He was not, however, afraid to call for a strike or a boycott.  Because he did not use violent methods like riots or terrorism, he earned the support of the U.S. government and the American people.  By 1900, the AFL had 500,000 tradespeople.  Other unions looked to him for advice and tried to organized their unions like the AFL.  Unions that organized like the AFL made a big impact.  There were over 20,000 strikes in America in the last twenty years of the 19th century.  Half the strikes were unsuccessful but the other half had their demands at least partially met.  The key to AFL success was that leaders used negotiations to compromise on demands, they used peaceful methods of protest, and they had realistic goals. 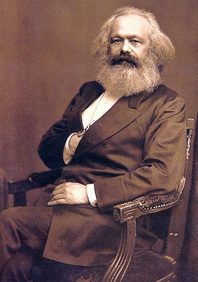 Karl Marx
Some people did not feel the American Federation of Labor was making enough progress, so they formed unions that were considered very radical.    Many people had lost faith in American capitalism.  Some of these people began to believe that socialism was a better answer.  Socialism was an economic system based on the beliefs of Karl Marx.  He believed that the wealth of a nation should be shared by all equally.  Hard working Americans began to agree with him.  How was it fair that they worked so hard but struggled so much and a few people were allowed to treat others poorly to gain their wealth?  Weren't the workers the means by which these big business leaders gained their wealth?  Wouldn't you think they'd be a little grateful?  Socialists believed that the government should own all industries and divide the profits among the workers - those who actually created the products.  It sounded good to workers but the middle and upper classes feared that socialism was against everything that the U.S. stood for. 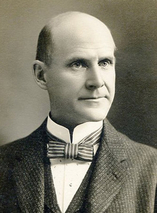 Eugene V. Debs
A man named Eugene V. Debs was the son of immigrants.  He worked in the railroad industry and believed in socialism.  He formed the American Railway Union in 1892 and it was not long before he became known as the Father of American Socialism.  Two years after he formed the union, the Pullman Car Company (train cars) tried to cut railroad workers' pay.  The workers refused to accept the pay cut, so the business owners fired 5,000 employees.  Debs told all the members of the union not to operate any trains that used Pullman cars.  The court declared the strike illegal and ordered the strikers to stop.  Instead a riot broke out.  President Cleveland sent federal troops to stop the riot.  They arrested Debs and the strike failed. 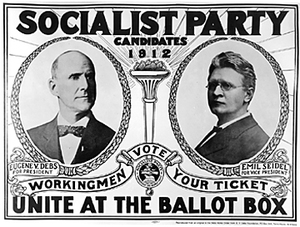 Debs was angry about the incident.  He decided the only way to gain any ground was to make it a political fight.  In 1900, Debs ran for president.  He did not win, but was able to take 87,000 votes.  Many others felt as Debs did.  They joined him to form the Socialist Party.  It gained over 100,000 members.  Debs ran for president two more times.  In the election of 1912 he got over 900,000 votes.  Debs was arrested for protesting World War I.  This did not stop him!  He ran for President from his jail cell and got 919,000 votes.  Debs died in 1926 having never won an election, but over one thousand Socialist Party members were elected to state and city governments.

Industrial Workers of the World

In 1903, working class women in Boston, Massachusetts joined with middle class women to fight poor working conditions, low wages, and wage discrimination.   They were known as the Women’s Trade Union League, also called the WTUL.  They held many strikes against factory owners.

Clara Lemlich
In 1909, shirtwaist workers in New York and Philadelphia were led by union leader, Clara Lemlich in a general strike.  Over 20,000 women walked off their jobs in protest.  The WTUL provided help to strikers.  Middle- and upper class women donated money, hired lawyers, held press conferences, and picketed.  The union did not succeed in achieving its goals but it did rally women together from all backgrounds in one common cause.   It was not long before a women's union emerged from the league that did accomplish reform.  This group was known as the International Ladies’ Garment Workers Union and they were a force to be reckoned with. 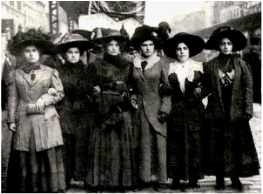 Uprising of 20,000
The International Ladies' Garment Workers Union became a powerful union and demonstrated that women were serious about equal treatment.  One of their most famous strikes was called "The Great Revolt."  It was more than the average strike!  It was a revolt of 60,000 women and teenaged girls who were fed up with oppression.   America learned that women could be the fiercest of warriors!   The group was also heavily involved in the fight to gain women the right to vote as well. 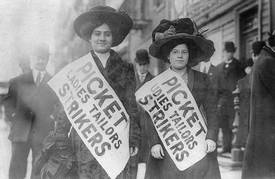 The Great Revolt
The International Ladies' Garment Workers Union dropped in membership when leaders started arguing about who should be the leaders and how the union should be run.  The union may have dwindled out, but it accomplished major changes.  It also proved that women were determined to gain equal rights and equal treatment and they would not stop until it happened!