"I wanted to be the first to view a country on which the eyes of a white man had never gazed and to follow the course of rivers that run through a new land." 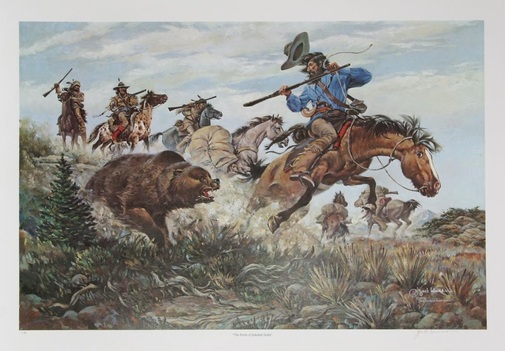 This painting illustrates the legendary stories of Jedediah Smith surviving grizzly bear attacks.
At the age of 22, Jedediah Smith signed on with the expedition of General William Ashley to travel to the Upper Missouri and trap beaver. A year later, he led another of Ashley's groups deep into the central Rockies where he rediscovered the forgotten South Pass, the key to the settlement of Oregon and California.

The wandering spirit was planted deep in the heart of Jedediah Smith. Born January 6th, 1799, Smith's family moved several times in an effort to stay on the edge of the growing frontier boundary. According to family tradition, young Jedediah read Biddle's 1814 edition of the Lewis and Clark journals and was set on living a life in the wilderness.

In his lifetime, Smith would travel more extensively in unknown territory than any other single mountain man. He traveled in the central Rockies, then down to Arizona, across the Mojave Desert and into California making him the first American to travel overland to California through the southwest. In a most amazing journey, he also came back from California across the desert of the Great Basin. The heat became so unbearable Smith and his men had to bury themselves in sand to keep cool. 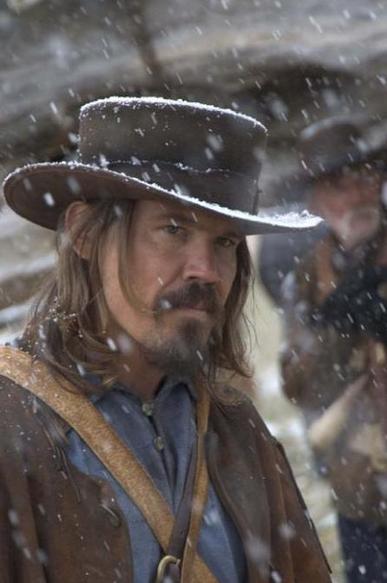 This is a picture of Josh Brolin portraying Jedediah Smith in the T.N.T. T.V. Mini-Series, Into the West, shown in the early 1990s.
Though he was an accomplished outdoorsman, Smith did not fit the stereotype of the typical mountain man. He never drank, never used tobacco, never boasted and was rarely humorous. Another rare quality was his strident faith. Smith was very religious and often prayed and meditated. When fellow trapper John Gardner died, Smith gave the eulogy, as recorded by expedition member Hugh Glass:

"Mr. Smith, a young man of our company made a powerful prayer which moved us all greatly and I am persuaded John died in peace."

Smith proved himself a leader quickly on the trail. On his second expedition, he was attacked by a grizzly bear. The bear came out of the thicket and mauled Smith violently, throwing him to the ground, smashing his ribs and literally ripping off his scalp. When the attack was over, the scalp was hanging on to his head by an ear. Smith instructed Jim Clyman to sew it back on. Clyman did the best he could, but thought nothing could be done for the severed ear. Smith insisted that he try. According to Clyman,

"I put my needle sticking it through and through and over and over laying the lacerated parts together as nice as I could with my hands."After two weeks of rest, Smith resumed his duty as captain of the party.

In 1830, Smith, rattled over the death of his mother and his neglect of family duty, decided he had had enough of mountain life. He purchased a farm and townhouse, complete with servants, in St. Louis. However, he would have to make one more fated trip into the wilds of the Southwest. When Smith sold his shares in the Rocky Mountain Fur Company the year before, he had agreed to help procure supplies for the subsequent owners. He left in the spring of 1831 and while looking for water on the Santa Fe Trail, he was killed by Comanche warriors.

Most of Smith's knowledge died with him. His plans to edit and publish his journals and have a master map constructed were never realized. Nevertheless, Smith was satisfied with his wilderness career.

"I started into the mountains, with the determination of becoming a first-rate hunter, of making myself thoroughly acquainted with the character and habits of the Indians, of tracing out the sources of the Columbia River and following it to its mouth; and of making the whole profitable to me, and I have perfectly succeeded."