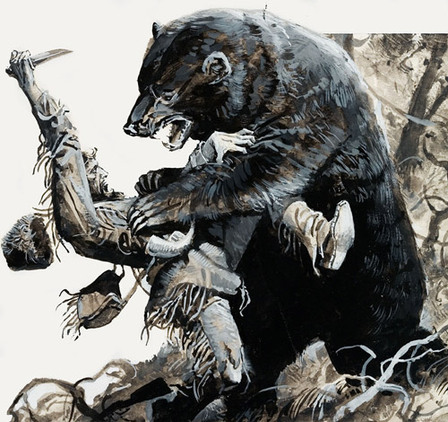 This painting illustrates the legendary stories of Hugh Glass fighting grizzly bears
The Mountain Men respected anyone with strength, speed, wilderness savvy, the ability to survive, however, they also had a great deal of respect for anyone with good luck, or “strong medicine”.  Hugh Glass was one man who, for a long run, seemed to have exceptionally good luck.

It is not known what Hugh Glass was before he appeared in the Rocky Mountains as a fur trader. According to his own story he was a seafarer, who was captured and escaped from pirates in the Gulf of Mexico.  In other stories he was himself a pirate.  In 1823, he joined with Ashley and Henry’s second fur brigade to the upper Missouri River country.  As part of Andrew Henry’s party, Glass and Morris Black Harris were out hunting for meat when they startled a sow grizzly bear with two yearling cubs.

Although the two mountain men were able to handle the grizzlies, Glass was severely injured in the attack, receiving deep lacerations and puncture wounds to his scalp, face, chest, back, shoulder, arm, hand and thigh.  With each gasp, blood bubbled from a puncture wound in his throat.  When his comrades pulled the body of the dead sow off of him, Daniel Potts remarked that Hugh Glass had been “tore nearly to peases”.

Glass, clearly, was going to die, if not within minutes, within the next couple of hours.  The next morning Glass had still not expired.  Henry’s party was at that time passing through dangerous Indian country.  The Arikara Indians, having been recently evicted from their village by an alliance of mountain men, Sioux warriors and the U.S. Army, were seeking vengeance on any white trapper they could find. Major Henry couldn't jeopardize the safety of the entire party for one man, who was certain to die anyway.   His comrades attempted to carry Glass on a litter, but after several days of difficult and slow progress Hugh Glass was still alive and the party still remained vulnerable to attack by Arikara Indians.  So Henry sought two volunteers, with an incentive of six months pay, to remain behind with Glass until he should die.

Jim Bridger, at only 17 and on his first trip to the mountains, and a man named John Fitzgerald volunteered.  Finally after a week, Hugh Glass was still alive, but showing no sign of improvement.  With fresh sign of Arikara in the area, Bridger and Fitzgerald lost their nerve.  They packed and left, taking Glass's gun and gear. When they rejoined Henry’s party, they reported that Glass had died, and was buried.

Glass, however, did not die.  Sometime after he was abandoned, Glass came out of his coma, so weak he could only crawl.  Then began Hugh Glass's six-week ordeal of strength, determination, luck and fortitude as he dragged himself back to Fort Kiowa, a trading post almost 200 miles away.  He lived on the meat of dead animals and rattlesnakes.  He slowly gained his strength so that he could walk upright.  Most of his mind was focused on seeking vengeance from the two men who had left him to die. 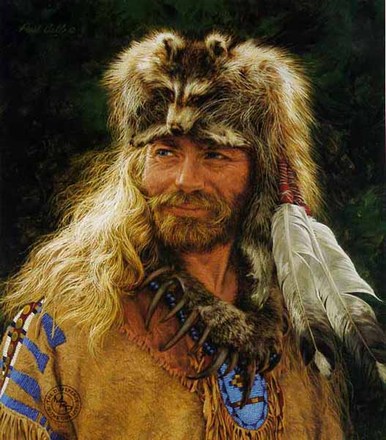 There are not many images of the "real" Hugh Glass because of when he lived. Many artists have attempted to capture their ideas of him though. Paul Calle painted this picture above.
After a period of recuperation at Fort Kiowa, Glass, now re-equipped returned to the mountains intent on revenge.  One evening, Hugh Glass showed up in Henry’s encampment, stunning his former comrades, who at this time all knew for a fact that Glass had been long dead and buried.  Jim Bridger was there, and Glass confronted him, only to forswear his vengeance on Bridger because of the boy's youth and inexperience.  Fitzgerald, who had by now left Henry’s party and the mountains would enjoy no such exemption.

In February of 1824, Henry decided to send a “winter express” down to Ashley informing him progress in the mountains, and of prospects for the future.  Five men went down, including Hugh Glass, who had unfinished matters with Fitzgerald to attend to.

In order to avoid Arikara Indians, they traveled by land to the North Platte River, where they built a bull-boat to continue their journey by water.  While traveling down the river, they were invited to camp with a group of Indians representing themselves as Pawnee.  Too late the mountain men discovered the Indians to be Arikara.

In their flight, two men were killed, two fled down the Platte River, while Hugh Glass hid in a rocky area as the Indians searched.  On their arrival in St Louis, the two who had fled down the river, reported that Hugh Glass had been killed in the confrontation.

Hugh had not died, and although he had lost his rifle, he was in much better physical condition then after the bear attack, and furthermore this time he had his knife. Again he made his way to Fort Kiowa, arriving in early June.

On his arrival, he was once again greeted as a ghost returning from the grave.  From there he descended the Missouri River to Fort Atkinson where he finally caught up with John Fitzgerald.   Fitzgerald had joined the Army, and Colonel Leavenworth, the fort commander, would not allow the murder of one of his soldiers.  Glass, unable to take the revenge he desired, had to be satisfied with denouncing Fitzgerald.

After this, Glass returned to the mountains and the fur trade.  By 1828, the soaring cost of supplies and trade goods in the mountains, so called “mountain prices”, had so rankled the free trappers, that they sent a delegation down to St Louis to invite a rival outfit to rendezvous to provide price competition.  Hugh Glass was one of the messengers.  The company he approached was the Western Department of the American Fur Company, John Jacob Astor’s company.

In early 1833 the luck of Hugh Glass ran out.  He, Edward Rose, and another man were taking a message to Fort Union.  As they crossed the frozen Yellowstone River, below the fort, thirty Arikara warriors charged down on them.  All three of the trappers were shot and killed.