HEALTH & MEDICINE IN THE TRENCHES 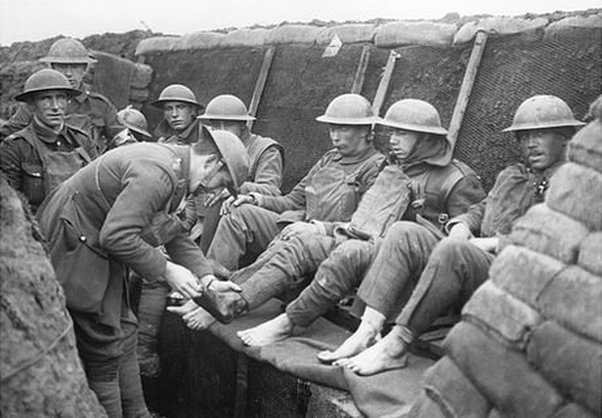 foot inspection
Soldiers suffered from many illnesses and injuries on the front line. Trenches were often cold and wet which made living in them very uncomfortable. Soldiers had to live with the constant fear of getting injured in battle and falling ill from the dirty and unhygienic conditions. Body lice were pests that made soldiers so itchy that they had to shave off their hair completely.
​
Illness and Disease 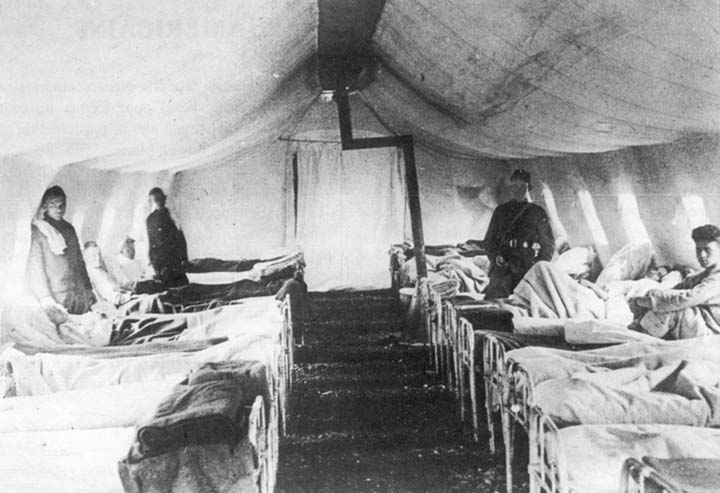 A field hospital in World War I
During World War One, soldiers suffered not only from injuries in battle but also from illnesses and diseases caused by the dreadful conditions in the trenches.
​
Illness from Poisonous Gas 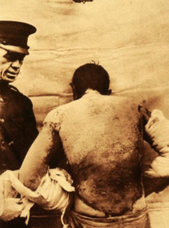 poison gas burns
​Poisonous gas was used as a weapon for the first time in World War One.   Some gas was intended to only cause noses to run and eyes to water. Others were far more dangerous.   When gas was first used, doctors and nurses did not know how to treat even simple symptoms. Gas could affect someone seeing and breathing in just a few minutes so protective masks were given to all soldiers. Some fumes stayed on clothes causing blisters and sores. Bathing and washing would have solved the problem but this was not possible in the trenches. Many soldiers suffered from the effects of gas attacks for the rest of their lives.
​
Trench Foot 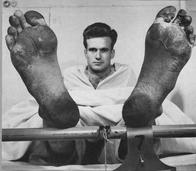 Soldier with Trench Foot
​Some soldiers suffered from a condition called trench foot.   This was caused by standing in water and mud for a long time and losing blood circulation. In some cases, soldiers' socks started to grow on to their feet. In severe cases, soldiers had to have their feet or legs amputated (cut off).
​
​Trench Fever 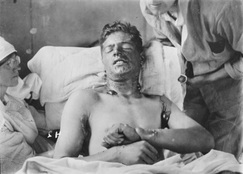 Soldier with Trench Fever
Trench fever was an unpleasant disease caused by body lice during World War One.   The fever was easily passed between soldiers, causing them to suffer from high fever, headaches, aching muscles and sores on the skin. It was painful and took around twelve weeks to get better from. For many soldiers, it was an illness that struck them more than once.
​
Shell Shock 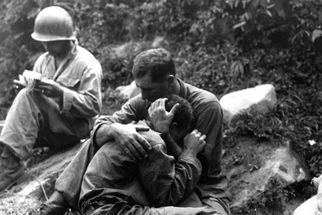 shell shocked soldier
Shell shock was another new illness during World War One. It was not a physical illness, but a mental one. The constant noise of explosions and guns, along with the smell and danger of the trenches made many soldiers very scared and uncomfortable. Shell shock caused soldiers to act strangely. They found life on the front line very hard to deal with and would stop being able to follow commands and do their duties properly.  To begin with, officers and doctors did not understand the illness and thought the soldiers were weak. Some were sent to special hospitals to recover. Others had to carry on fighting.
​
Medicine & Treatment 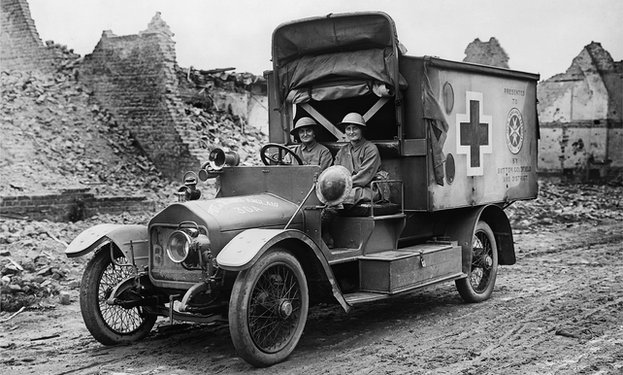 Medicine and care had to develop very quickly during the war to deal with different types of injuries and casualties. Improvements in transport were a big help.
​X-Rays 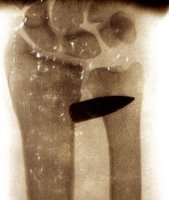 xray showing a bullet in the body
Scientists and doctors found it was important for injured soldiers to be treated within an hour. New, motorised ambulances and trains helped to make getting to the injured easier and mobile X-ray units improved the level of care that could be provided.  These X-ray units could be taken to the soldiers. They told doctors where in soldiers' bodies any bullets or pieces of shrapnel were. The fact that skilled nurses were allowed closer to the front line than in other wars was also very helpful.  With the development of X-ray technology, surgeons were able to detect where a bullet had penetrated. Many operations were successfully performed during the war thanks to this advancement in medicine.
​
Blood Transfusions 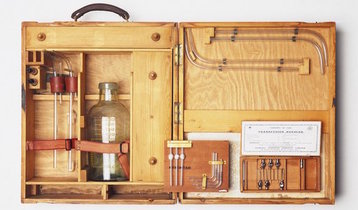 blood transfusion kit
Nurses still only had salt water to clean wounds.  Soldiers did not always realize that open wounds were more likely to get infected.  Blood was first stored successfully during World War One. This meant doctors could now give blood transfusions to soldiers when they had lost blood. This was a process where they transferred blood taken from a healthy person, to someone who had lost a lot of blood. Blood transfusions prevented many deaths. In previous wars, soldiers with severe burns, tissue damage and contagious diseases would have usually died.
Treating Soldiers 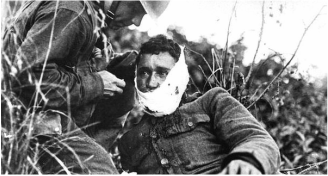 Injured and sick soldiers needed to be treated quickly so they could go back to fighting as soon as possible.  They were pre-treated on the field to make them stable enough to get to the hospital.  This was called triage. 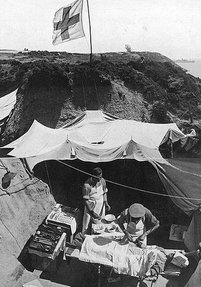 Triage at a field hospital
Triage was the first response medical care that soldiers received.   Sick soldiers were put into one of three possible groups:
Spanish Flu 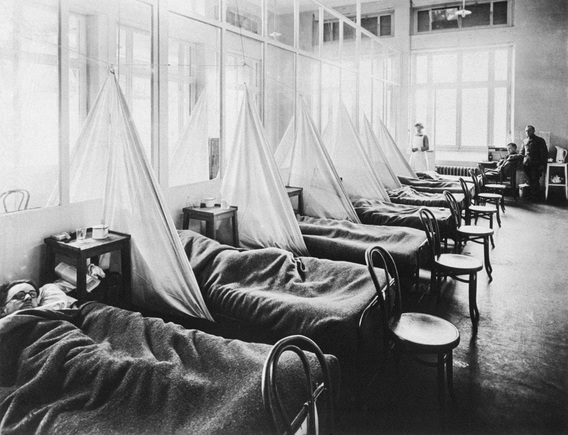 In 1918, towards the end of the war, the biggest illness of all began to spread around the world.
The Greatest Enemy of All 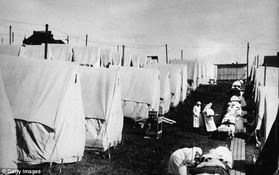 Spanish Influenza (flu) was first reported in March 1918 and quickly became a pandemic (an illness that spreads around the world).   It became known as Spanish Flu because Spain was one of the earliest countries to be hit hard by the disease. By June 1918, it had spread around the world.   It was called "the greatest enemy of all" because it infected about half of the world's population. 40-50 million people died of this illness - many more people than the war itself.
What Was To Blame? 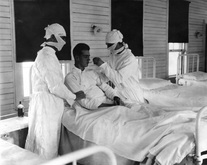 At the time, people were not sure what had caused the outbreak of the flu. Some thought it might be caused by poison gas. Today we know it developed in animals and birds then spread to people. Influenza spread all around the world on ships trading goods with other countries. The war helped it to spread because more people than usual were travelling. Soldiers also lived very closely together in camps and trenches and this helped the influenza to spread more easily.
Spread of the Flu

Spanish Influenza seemed just like an ordinary cold when a person first got it. It developed quickly and sometimes people died just a few hours after they realized that they had the illness.
Women on the Front Line 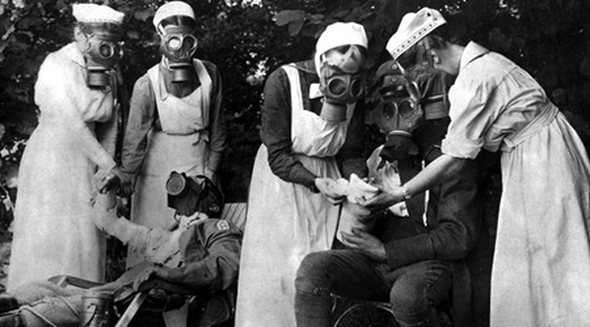 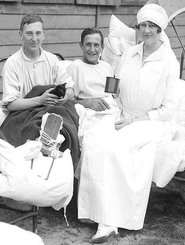 Casualty clearing stations were set up close to the battlefields, some by the Red Cross. After being treated in the trenches, wounded soldiers would be taken first to a clearing station then moved on to a general hospital if they needed more treatment.

​Female volunteers who wanted to help were allowed to work as nurses at casualty clearing stations. Some drove ambulances. This was usually the closest they were allowed to get to the front line but it was still close enough that they might be hit by enemy fire. Most worked 14-hour days and sometimes even longer when there were lots of injured soldiers. The soldiers liked having women around because they reminded them of their mothers, wives and sisters.
Back to Life In the Trenches Center