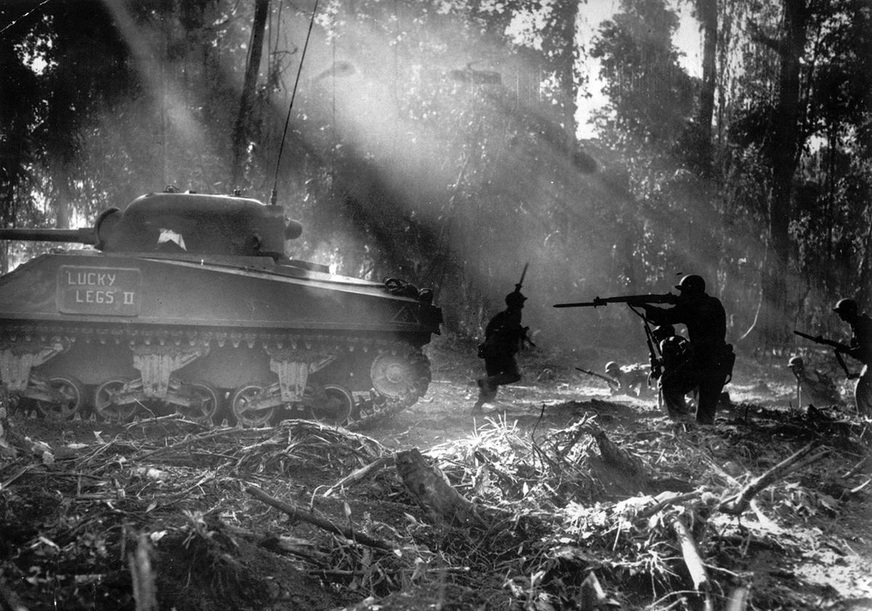 President Franklin D. Roosevelt was president of the United States when Japan attacked Pearl Harbor.  The following excerpt is a portion of the speech that FDR gave to Congress on December 8, 1941 asking Congress to declare war on Japan.
America - Arsenal of Democracy

Despite the losses at Pearl Harbor, the industrial capability of the United States was quickly mobilized. The U.S. quickly increased the size of its army and began overhauling its factories to manufacture weapons, ammunition, ships, planes, tanks, and the other necessities of war. In addition to supplying its own military, the United States was able to ship these products to its allies in Britain and the Soviet Union who were desperately in need of them. The United States was the “arsenal of democracy,” supplying other countries as well as itself.
Fighting Back 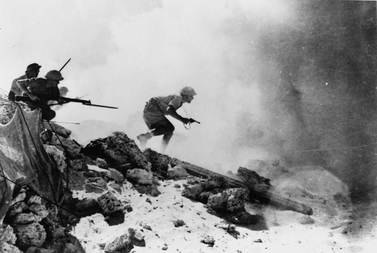 ​In the Middle East, Allied troops gained control of Iraq, Syria, Lebanon, and Iran.  In the Battle of El Alamein in Egypt in 1942, they took command of Northern Africa. Allied troops invaded Italy, and Italy surrendered in 1943. In 1944 the Allies attacked German-held areas in Italy.
D-Day at Normandy 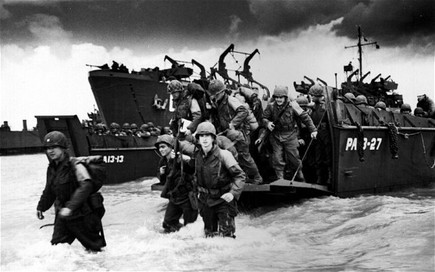 On June 6, 1944, or D-Day, the Allies launched the greatest amphibious assault (land and water) in history at Normandy on the coast of France. More than 2,700 ships and 175,000 men participated in the invasion of Europe. After bitter fighting, the Allied forces of England, the United States, and French Freedom Fighters finally broke through stiff German resistance in late July 1944, rolled eastward liberating Paris in August, and pushed on toward Germany.  German troops stopped the Allied advance temporarily at the Ardennes Forest in Belgium, but in the Battle of the Bulge, American and Allied troops eventually won and moved on toward Germany.
Soviets Push Back Germany 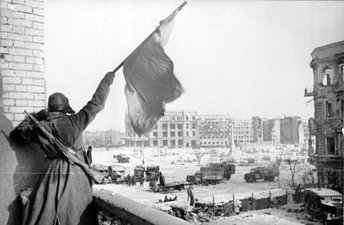 Soviet forces hammered German troops in the east. After the Soviet victory at the Battle of Stalingrad, their troops pushed steadily west. They won a massive tank battle at Kursk, forcing the Germans to retreat to save their remaining tanks. In January 1944, the Soviets ended a two-year German siege of Leningrad where over a million of their citizens had died. By 1944 the Soviets had forced German troops off its own territory and invaded Germany. Hitler committed suicide on April 30, 1945, and Germany surrendered unconditionally on May 7, 1945.
War in the Pacific

​After Pearl Harbor, Japan launched a series of victorious assaults. They overran Thailand, Burma, Hong Kong, Malaya, Singapore, Indonesia, much of New Guinea, and the Philippines. They were within striking distance of Australia. 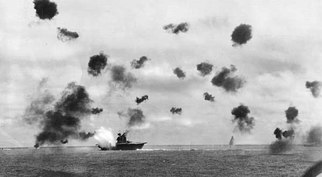 The United States was able to win two decisive victories in the Battle of Coral Sea in May 1942 and the crucial Battle of Midway in June 1942. This latter battle was probably the most important naval engagement in 500 years. It turned the tide of war for the U.S. and its allies. In a major series of battles, American troops and their allies retook the Gilbert, Marshall, and Mariana Islands, which became bases for launching air attacks against Japan itself. Allied forces invaded the Philippines and Burma.
The War Ends 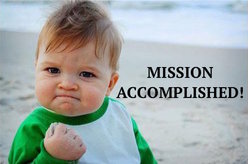 ​
​You have completed the Fighting in World War II Fast Track Lesson.