WHAT IS CHEMICAL WARFARE? 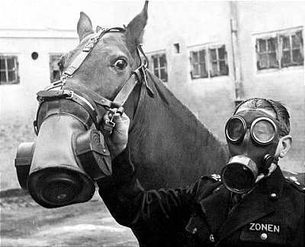 Types of Gases
The chief types of gases produced for use against humans are blister, choking, nerve, vomiting, and tear gases.
Blister gases, such as mustard gas produce a reddening of the eyes, skin, and mucous membranes, followed by blisters. The bronchial tubes are irritated, and pneumonia usually develops.  Mustard gas often remains on the ground for several days. Mustard gas, which is lethal only in heavy concentrations, is used to stop troops.  Choking gases, such as chlorine, attack the respiratory tract. Chlorine, first used in World War I, produces quick irritation and choking. The lungs slowly fill with fluids and the victim suffocates within a few days.  Nerve gases, such as Tabun, Sarin, and Soman are colorless, odorless, and tasteless. These gases destroy the normal functioning of nerves and muscles. The gases enter the body through the lungs, skin, or mucous membranes, and the victim dies within a few minutes after the poisons enter the blood.  Vomiting gases, such as DM, rarely kill, but cause severe sneezing, coughing, headache, nausea, and vomiting.  Tear gases, such as CN, produce severe eye irritation, resulting in a blinding flow of tears.

HOW WAS CHEMICAL WARFARE USED IN WORLD WAR I? 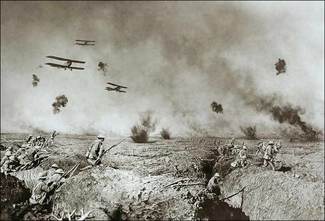 The First World War is often marked as one of the first instances of chemical warfare. On April 22, 1915, the Germany Army used chlorine gas at the Battle of Ypres. Although very few people died, the news of this started widespread panic, and gas masks became a common part of the soldier's equipment.

There were several methods used to deliver gas in an attack. In the gas cloud, or mist, attack, the wind was used to carry the gas to the enemy lines. Gas was also delivered in artillery shells and aerial bombs, and was sprayed from low-flying aircraft.

WHY WAS CHEMICAL WARFARE USED IN WORLD WAR I? 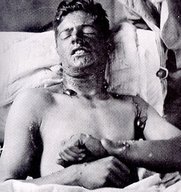 Gas attacks were the most feared weapon in World War 1. They were very dangerous weapons causing over 1 million casualties and about 100,000 deaths during World War 1, mostly during the beginning stages of the war. It was a very scary weapon because it didn't kill instantly. It took days or weeks of suffering until it finally killed. The most well known symptom was blindness. It also caused lung damage and breathing problems and eventually killed.

Both sides of the war used gas as a weapon; although it was not always safe: when the wind changed direction, gas could be against you!  Gas was mainly used to stop or injure the enemy.  It wasn't until 1915 that it was used to kill the enemy.  Chlorine was first used by Germany in 1915 when they  released 180 tones of gas, in a flow which lasted for 5 minutes.  The Germans were heavily criticized by most nations of the world.  The Allies retaliated and used it against the Germans after the Germans first introduced it.

There were advantages and disadvantages to using chemical warfare.  The biggest advantage was that it was really hard to protect yourself from the gas attacks early on in the war and it was a huge element of surprise. The soldiers would dive into shell holes to protect themselves, but it would drop down into the shell holes and suffocate them because the gas is much heavier than air.

Another advantage was that it could be used at any time in trenches even when there is no attack going on. The gas attacks forced enemies to put gas masks on. Early on, the gas masks would leak a lot and result in many deaths, but the gas masks improved later on. Other protection methods were using cotton pads covered in a solution of bicarbonate of soda or cloths covered in urine.

Poison gas contained chlorine and many other materials. Effectiveness of gas diminished later on in the war as methods of protection were becoming more effective. The most dangerous type was the mustard gas, which was extremely fatal. It took time to perfect the gas attacks that was first used as just irritants, but then were later used to kill. 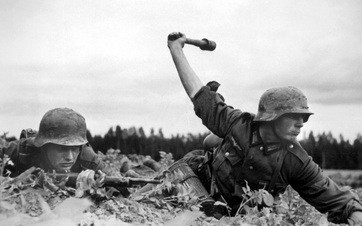 So, gas attacks were very efficient, but as time passed armies were able to develop better methods of protection and diminish the efficiency of the gas attacks.