WHAT IS TRENCH WARFARE?

A trench is a manmade ditch built by soldiers to shelter themselves from enemy fire.  Soldiers dig a hole about three feet wide at the bottom and eight feet deep. Boards were placed on the ground to act as drainage. On the side of the trench facing the enemy a ‘fire step’ was cut into the wall. This was for soldiers to shoot from and a platform for machine guns.  Sandbags were placed at the top of the trench. This would stop the trench caving in if a bomb went off nearby. It also provided more protection from bullets. In front of the trench Barbed wire was rolled out. This was to stop soldiers being able to charge at the trench.  The British developed the tank to destroy machine gun positions, cross rough ground and go through belts of barbed wire.  The diagram to the left shows you what a trench might have looked like.

WHY WAS TRENCH WARFARE USED IN WORLD WAR I?

In the early weeks of the First World War both German and French commanders knew that the war would require them to defend their own territory and protect any gains in territory.
In the beginning of the war, Germany gained a lot of territory by entering France by surprise through Belgium.  It wasn't long though, before France's Allies helped push back the Germans.  The Germans did not want to lose the territory they had gained so they "dug in" to avoid losing any more ground.  When the Allies were unable to break through the German line of defense, the Allies also began to dig their own trenches. 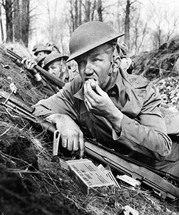 There were many advantages and disadvantages to trench warfare.  Trenches were easy to make, easy to defend, cheap to build, and don’t need lots of men to defend them.  Unfortunately trenches are wet, cold, and hard to get in an out of without being seen by the enemy. They were also very dirty and unhygienic because there was no running water or flushing toilets.

HOW WAS TRENCH WARFARE USED IN WORLD WAR I? 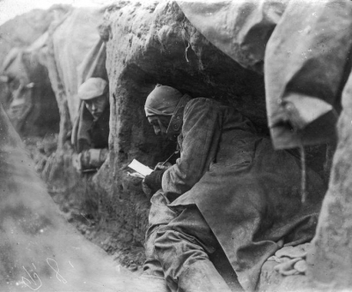 Trenches were dug in a zigzag pattern so that if an enemy entered the trench, he could not fire straight down the line. A typical trench system included a line of three or four trenches: the front line (also called the outpost or the fire line), the support trench, and the reserve trench, all built parallel to one another and anywhere from 100 to 400 yards apart.  The main trench lines were connected by communicating trenches, allowing for the movement of messages, supplies, and soldiers. Protected by fields of dense barbed wire, the fire line was located at varying distances from the Germans' front line, usually between 50 and 300 yards. The area between the two opposing armies' front lines was known as "no man's land."

Some trenches contained dugouts below the level of the trench floor, often as deep as twenty or thirty feet. Most of these underground rooms were little more than crude cellars, but some -- especially those farther back from the front -- offered more conveniences, such as beds, furniture and stoves. 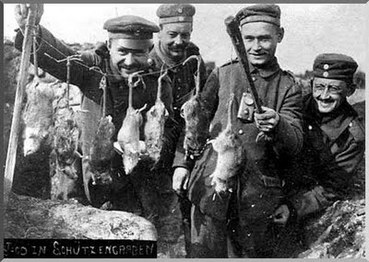 Routines were different for different troops, but as a general rule, soldiers began the day fighting in the front line, followed by a period of time in the reserve or support line, then later, a brief rest period.  Each morning and evening, just before dawn and dusk, the troops participated in a "stand - to" during which men on both sides climbed up on the fire-step ready with their rifle and bayonet. Following the stand-to, officers conducted an inspection of the men and their equipment. Breakfast was then served, at which time both sides almost universally along the front adopted a brief truce.

Most shooting and bombing was carried out in the dark, when soldiers were able to climb quietly out of the trenches to conduct surveillance and carry out raids.  The daylight hours were a time of chores.  The trenches required constant work.  Soldiers repaired shell-damaged walls, removed water that had pooled in the trenches, cleaned up messes, and moved of supplies. During brief rest periods men were free to nap, read, or write letters home, before being assigned to another task.


The trenches of World War One were decidedly unhygienic. Pests roamed around the land, including giant rats that I'll describe in the next section. Men could not wash themselves in the trenches: they had limited access to running water, and often did not have the time to think about hygiene. The toilets of the trenches were usually just large buckets in a side trench, but they were not always used. Using the toilet left you vulnerable to enemy attack, and some soldiers would opt to relieve themselves where they were. Understandably, dysentery was a common ailment in the trenches. Dead bodies littered the land, and continuous gunfire was heard all around. This gunfire drove some soldiers mad, this was called shell-shock.

In the cramped trenches, many parasites thrived. The worst of these were the rodents: rats gorged themselves on human remains, and grew to massive sizes: some reported rats as big as domestic cats. The rats would also sometimes eat the fresh rations of the soldiers, and nibble at the soldiers themselves as they slept or if they were wounded. The rodents would attack a corpse's eyes, and then burrow themselves into the bodies. They were a terrible problem: as one pair of rats can produce as much as 880 offspring a year, the trenches were soon crawling with millions of them. Some men made pets of the animals as company, but most rats were fearsome creatures.

Another terrible pest of the trenches were lice. Lice as you probably know, are parasites that are hard to get rid of; they bred in uniforms and caused the soldiers to itch. Although this was not know until 1918, lice were also the cause of the dreaded Trench Fever, a painful disease that began as severe pain and a high fever. This disease was caused by the bacterium Bartonella quintana, which the lice spread. Many soldiers succumbed to the disease, and only twelve weeks of recovery away from the trenches would cure it. Other pests of the trenches included frogs, slugs, and horned beetles. Normally, they were not problems, but if you happened to slip on a frog and fall, it could be deadly!

Another terrible aspect of the trenches were the weather conditions. Most trenches were muddy, cold, and overall depressing. Many soldiers simply died from exposure to the cold, as the temperature within a trench was often below zero in the winter. Soldiers would lose fingers and toes to frostbite, and trenches were often filled by the rain— sometimes, the trenches would fill with water up to the soldiers' waists. This submersion caused a terrible fungal infection called "Trench Foot." The feet that succumbed to this could turn gangrenous, and often needed to be amputated. As conditions improved, Trench Foot became less frequent; however, a trickle of cases continued. Good socks and boots were essential to some soldiers.


Often, burials did not happen at all for the dead. Death was a constant companion of the soldiers, and they had no time to bury the multitudes of corpses. Bodies would lie in No Man's Land for ages, and even when the front line moved forward, these bodies were sometimes not buried, and often could not be identified. Soldiers would first bury their known companions, then their fellow countrymen, and then finally the enemy— but they rarely buried the enemy. On some battlefields, bodies were not buried until afte the war.